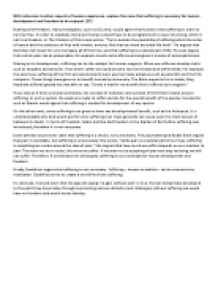 With reference to other aspects of human experience, explore the view that suffering is necessary for human development and freedom to be enjoyed.

Transfer-Encoding: chunked ﻿With reference to other aspects of human experience, explore the view that suffering is necessary for human development and freedom to be enjoyed. (15) Starting with freedom, many theologians, such as CS Lewis, would agree that humans need suffering in order to be truly free. In order to eradicate moral evil humans would have to be programmed to never do wrong, which is not true freedom. In The Problem of Pain Lewis writes, ?Try to exclude the possibility of suffering which the order of nature and the existence of free wills involve, and you find that you have excluded life itself.? He argued that God does not mean for us to be happy all of the time, and that suffering is a natural part of life. ...read more.

These things have gone on to benefit humanity immensely. The Bible supports this in Isaiah; King Hezekiah suffered greatly but was able to say, ?Surely it was for my benefit that I suffered such anguish.? If you look at it from a secular worldview, the concept of evolution and survival of the fittest revolve around suffering. In such a system the weak are made to suffer and die for the overall benefit of the species. Secularists such as Darwin would agree that suffering is needed for development of any species. On the other hand, some suffering is too great to have any developmental benefit, such as the Holocaust. ...read more.

The more we try to resist, the more we suffer. If we learn to be accepting of pain and stop resisting, we will not suffer. Therefore, if one follows her philosophy suffering is not necessary for human development and freedom. Finally, Buddhism argues that suffering is not necessary. Suffering ? known as dukkha ? can be overcome by meditation. Buddhists strive to create a world free from suffering. To conclude, it would seem that the age-old saying ?no gain without pain? is true. Human beings have developed to the point they have today through overcoming various obstacles and challenges; without suffering we would have no freedom and would never develop. ...read more.