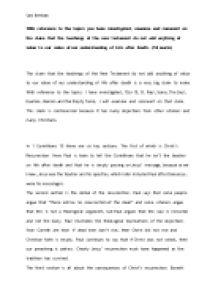 With reference to the topics you have investigated, examine and comment on the claim that the teachings of the new testament do not add anything of value to our value of our understanding of Life after Death. (50 marks)

Additionally, Paul uses the analogy of the seed, stressing the continuity of the earthly body with the resurrected ?glorious? body. In 1Cor 15:50-54 Sanders comments that immortality is ?put on? and replaces mortality. Paul was not thinking of an interior soul which escapes its mortal shell and floats free, nor the new life being breathed into the same body, but again of transformation, achieved by covering mortality with immortality, which it ? swallows?; emphasising the physical. Wright and Barrett argue similar points. My own personal opinion is that Paul believed more in a spiritual resurrection but he didn?t rule out a physical resurrection. In light of the statement I think that this is an influential part of our understanding of Life after death because it helps us understand which resurrection was more likely. The term ?soul? refers to ourselves, who earn rewards and consequences by coming to know, or failing to come to know, God by faith. We will come to earn blissful life in heaven, or eternal loss of heaven. Jesus? parables clearly teach us that it is the same self judgement which faces judgement after death as the self who lived on earth in the body. There are three different theories about the soul. The first theory being the Theory of Origen. The soul existed in the heavenly realms before descending into this world, and that its present imprisonment in a material body is the result of a primeval fall from grace. This was never widely accepted, and rejected by the Church at the Council of Constantinople in 540 AD. The second argument is that of Traducianism. The theory that the soul-substance which God breathed into Adam has been passed down through generation after generation of his descendants by continual division. To some extent, this draws parallel with modern genetic science: everything comes from a gene pool. This was gradually abandoned by the Church. ...read more.

Brown argues that there was an understandable hostility in the early church toward the Jewish leaders. In Christian eyes, they had engineered a judicial murder of Jesus. Therefore, because Joseph of Arimathea was a part of the Sanhedrin that condemned Jesus, it is highly unlikely that he was a Christian invention (there is no reason why Christians would make up a story about a Jewish Sanhedrinist who does what is right by Jesus!). The empty tomb is reported by many independent early sources (incl. Mt, Mk, Lk, Jn, and Paul). Jewish historian Josephus reports that Jewish women were not even allowed to serve as witnesses in court; making it even more remarkable that it was women who discovered the empty tomb (surely this detail would have been omitted or changed if it were not true?!). My own personal opinion is that there was a resurrection, but going on the arguments given to us, I think that it was a bodily resurrection and that I would fall under the bracket of a monist. I believe that the New Testament teachings help us in our understanding of Life after Death because it teaches us about the body and soul, but I believe that it was a bodily resurrection because i believe the that the body and soul must have been working together as one to raise Jesus from the dead, because if it was one or the other then Jesus would have come back as a different person. Others would disagree with me because they feel that the bible is made up and that the historicity aspect is just coincidence and that it was a recent write-up of events of landmarks still existing today. This view fails because Johanine eschatology proves otherwise. The pool with five porticos still exists today, and that wouldn?t have been included in John?s gospel if it didn?t exist in John?s time. The eschatological aspect of it is that Jesus? second coming will be at the Parousia when, we rise, bodily and spiritually to overcome death and evil. ...read more.