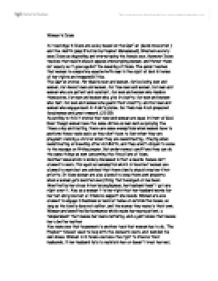 Muslims believe that you are obeying the commands of Allah when you wear the hijaab and you can expect great rewards in return. They believe it is Allah's protection of your natural beauty. Woman are too precious to be "on display" for each man to see. It is Allah's preservation of your chastity. And many other reasons. "Their reward is with their Lord: Gardens of Eden underneath which rivers flow wherein they will dwell for ever; Allah is pleased with them, and they are pleased with Him; this is (in store) for whoever fears his Lord." [Sooratul-Bayyinah 98:8] Also the fact that many of their friends have boyfriends and have sexual intercourse with them must be very difficult for her as she is tempted to do so herself but in Islam any form of fornication is a sin, and great punishments in the hereafter are followed as a consequence to that. "The woman and the man guilty of adultery or fornication,- flog each of them with a hundred stripes: Let not compassion move you in their case, in a matter prescribed by Allah, if ye believe in Allah and the Last Day: and let a party of the Believers witness their punishment. Let no man guilty of adultery or fornication marry and but a woman similarly guilty, or an Unbeliever: nor let any but such a man or an Unbeliever marry such a woman: to the Believers such a thing is forbidden". ...read more.

The quran and sariah both detail on how male and female Muslims should live their lives, and also gives details on their right and responsibilities. Traditional views are that Women have rights guaranteed to them by Allah, as well as duties expected of them. Marriage is expected of Muslims, it is a holy duty through which they continue Allah's purpose, unlike in Christianity marriage isn't a promise between the two party's and god but is more of a civil contract which can be broken, but can only be done if both parties are willing. Firstly the woman receives a two part dowry, the first one is given when they get married and the second one is given if the husband dies or he divorces her. The first part of the dowry is called mahr and belongs to the woman she uses this money to furnish her house or buy clothes. Even in traditional islam the woman was able to divorce her husband but must first go through courts and present desertion, neglect, or the extended imprisonment of her husband as a reason for divorce. A husband may divorce his wife by announcing such "I divorce you" three times and then waiting three menstrual cycles to pass to ensure that his wife is not pregnant. A woman may inherit and own property, although she may receive a smaller portion than male heirs, she cannot receive less than a one sixth, and may appeal to a court if she has been cheated. If a woman brings property into a marriage, she may retain control of it. ...read more.