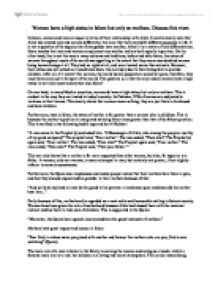 Women have a high status in Islam but only as mothers. Discuss this view.

Women have a high status in Islam but only as mothers. Discuss this view. In Islam, women and men are equal in terms of their relationship with Allah. It can be clearly seen that Allah has created men and women differently, this is so that they may fulfil different purposes in life. It is not a question of the superiority of one gender over another, rather it is a matter of role differentiation. Islam teaches that men and women complement one another and are both equally important. On the other hand, this is not the case is many cultures and traditions; before and after Islam, the status of woman throughout much of the world was appalling to the extent that they were even doubted women being human beings at all. They had no rights at all, and were treated worse than animals. However, their status was not as bad as it could have been; this is simply due to them being able to provide children. After all, if it weren't for women, the world human population would not grow, therefore, they must have some use to be apart of the world. The question is, is that the only reason women have a high status in not only recent society but also Islam? ...read more.

Mothers have great respect and honour in Islam "Fear God, in whose name you plead with another and honour the mothers who ore you, God is ever watching" (Quran) The main role of a man in Islam to the family is earning the income and acting as a leader, whilst a females main role is to rear her children in a loving and moral atmosphere. This is also means being responsible for the religious and moral teachings within the home. She makes the children learn orally the basic tenets of the Islam and the Adab or etiquette of Islam. This clearly shows as the mother is raising the children who can be the leaders of the society or contribute a lot to the society in the future. Therefore, it is important that these children are grown up in the most respectful and Islamic way. By keeping the family united and strong, the Muslim mother will ensure the survival of moral society and thus, the values of the Islamic way of life. Hence, a mother has a very important role and is the reason why she has a high status in Islam. On the other hand, others believe that women do have a high status in Islam generally and not just as a mother. ...read more.

This clearly shows that women in Islam are generally given a high status. Women as mothers are not only given a high degree of honour, but also as wives, daughters and sisters. "Men and women have the same spirit, there is no superiority spiritual sense in between" The prophet also clearly emphasises the reward in growing up a female child. He stated that "Anyone who has two or more daughters and did not bury or insult them, brought them up properly and did not favour his sons over his daughters, he and I will be like this..." At that moment he put up two fingers side by side as a metaphor to show how close that father would be to the Prophet (s) himself. In conclusion this clearly shows that a having a daughter is such a great admiration, and those who grow them up well have great respect. Hence all women have high status, their ideas and opinions are always welcomed. They have rights economically, socially and politically, just as men do. Although a mothers role is greatly admired in Islam and she has many rights over her children, her daughter or sister have similar rights over her as she is no greater than them in terms of being a true slave of Allah. ...read more.