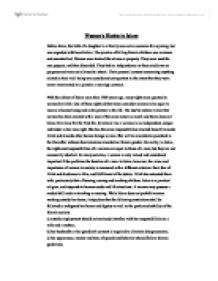 Women's Rights in Islam Before Islam, the birth of a daughter in a family was not an occasion for rejoicing, but was regarded with humiliation. The practice of killing female children was common and uncontrolled. Women were treated like slaves or property. They were used for one purpose, and then discarded. They had no independence as they could own no property and were not allowed to inherit. Their personal consent concerning anything related to their well-being was considered unimportant to the extent that they were never even treated as a party to a marriage contract. With the advent of Islam more than 1400 years ago, many rights were granted to women by Allah. One of these rights id that Islam considers woman to be equal to man as a human being and as his partner in his life. ...read more.

Allah has entrusted them with, particularly that of bearing, rearing and teaching children. Islam is a practical religion, and responds to human needs and life situations. A woman may possess a needed skill such as teaching or nursing. While Islam does not prohibit woman working outside her home, it stipulates that the following restrictions shall be followed to safeguard her honor and dignity as well as the purity and stability of the Islamic society: a) outside employment should not seriously interfere with her responsibilities as a wife and a mother; b) her husband's or her guardian's consent is required to eliminate disagreements; c) her appearance, manner and tone of speech and behavior should follow Islamic guidelines; d) her job should not be one in which mixing and associating with men is usual. ...read more.

Besides, Islam has granted woman the right of permission. The Prophet, peace be upon him, said, "A matron should not be given in marriage except after consulting her; and a virgin should not be given in marriage except after her permission." Khans'a Bint Khidam Al-Ansariya narrated that her father gave her in marriage when she was a matron and she disliked that marriage. So, she went to Allah's Apostle, peace be upon him, and he declared that marriage invalid. But the fact remains that whatever rights modern Western women have, they fall short of those of their Muslim counterparts. Islam has given woman full security and protects her against becoming what Western modern woman herself complains against: "a mere sex object." ...read more.