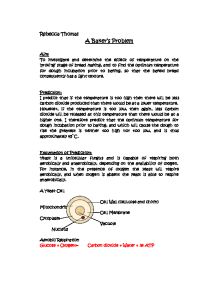 Rebecca Thomas A Baker's Problem Aim: To investigate and determine the effect of temperature on the 'proving' stage of bread making, and to find the optimum temperature for dough incubation prior to baking, so that the baked bread consequently has a light texture. Prediction: I predict that if the temperature is too high then there will be less carbon dioxide produced than there would be at a lower temperature. However, if the temperature is too low, then again, less carbon dioxide will be released at this temperature than there would be at a higher one. I therefore predict that the optimum temperature for dough incubation prior to baking, and which will cause the dough to rise the greatest is neither too high nor too low, and is thus approximately 45�C. Explanation of Prediction: Yeast is a unicellular fungus and is capable of respiring both aerobically and anaerobically, depending on the availability of oxygen. For instance, in the presence of oxygen the yeast will respire aerobically, and when oxygen is absent the yeast is able to respire anaerobically. A Yeast Cell Cell Wall (cellulose and chitin) Mitochondrion ? Cell Membrane Cytoplasm Vacuole Nucleus Aerobic Respiration Glucose + Oxygen Carbon dioxide + Water + 38 ATP Anaerobic Respiration Glucose Ethanol + Carbon dioxide + Heat + 2 ATP At the top of the test tube, the yeast will be respiring aerobically because oxygen is not limited there. However, at the bottom of the test tube, the yeast will respire anaerobically as oxygen is absent there. Carbon dioxide will be produced from both forms of respiration. The carbon dioxide produced in these reactions causes the dough to rise (ferment or prove), and the alcohol produced from anaerobic respiration mostly evaporates from the dough during the baking process. The bread will also have a light texture due to the production of carbon dioxide, and the baker will have achieved his aim. ...read more.

I will also use a yeast suspension because it is more practical than dough, as it would be both difficult and time consuming if I had to wash the greased measuring cylinders after each test, and it would also be complicated when measuring how much the dough had risen accurately. To temperature equilibriate, I will use a water bath, a Bunsen burner and a thermometer. Also, I will use a thermostatically controlled water bath to maintain the temperature inside the test tube. To collect the carbon dioxide gas, I will use a gas burette instead of a gas syringe, as I do not believe that enough carbon dioxide gas will be released in two minutes to allow the gas syringe to work effectively, and thus, preventing me from obtaining sufficient results. Preliminary Results: Temperature �C Volume of carbon dioxide Cm� Time Seconds 10 0 120 20 0 120 30 3.5 120 40 4.1 120 50 10.8 120 60 0 120 From the above results, I can see that two minutes is a sufficient time length in which the carbon dioxide gas can collect. However, I will select a narrower range of temperatures. For instance, no gas collected has collected at 10 or 20�C, so the lowest temperature I will investigate will be 30�C. At 60�C no carbon dioxide has collected either. Therefore, the highest temperature I will test will be 55�C. Plan: Using a top pan balance, weigh a recipe for the yeast solution, containing 3g of glucose: 2g of dried yeast: 1g of yeast extract: 100cm� of water. Pour these ingredients into a small beaker and stir with a glass rod. Set up the remaining apparatus, as shown in the apparatus list. Using a syringe, measure 20ml of yeast solution and ensure that there are no air bubbles at the top of the syringe, which might otherwise prevent the measurement from being accurate. ...read more.

To perfect the accuracy of the experiment, we could make certain that there are no air bubbles present in either the syringe or the gas burette, which would otherwise cause the results to be erroneous. To prevent any carbon dioxide entering or escaping the test tube, we could use cling film, in the place of a bung, which would improve the accuracy further. When the test tube was being shaken, we were unable to control the number of 'shakes' or its power. Therefore, we could perhaps use a machine that would vibrate the test tube for a controlled number of times in the controlled length of time the carbon dioxide gas had to collect in the gas burette. The water bath was difficult to maintain at a constant temperature, as the Bunsen burner was not appropriate. We could therefore use a thermostatically controlled water bath for this, as well as using it to control the temperature of the test tube containing the yeast solution. Finally, this investigation was inaccurate because carbon dioxide is to some extent soluble in water, and so some may have been lost as it dissolved into the water, thus, decreasing the actual volume of carbon dioxide gas collected in the gas burette. The investigation is relatively reliable because it was replicated three times and mean results for each different temperature were calculated, allowing us to eliminate any inaccuracies or anomalous results. However, by replicating perhaps five times, the reliability will increase further. To support my conclusion, I could complete a further investigation based around the optimum I discovered in this investigation. For example, I could use a range of temperatures from 40�C to 50�C, with 1�C intervals. This is because the optimum temperature could be between 40�C to 45�C or 45�C to 50�C. To extend the enquiry, I could use dough instead of a yeast suspension. I could also vary the type of flour, the type and amount of sugar, the duration of the incubation process, or a combination of these factors. ...read more.