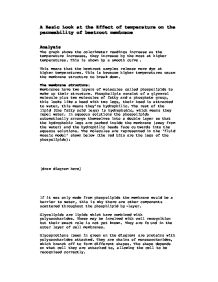 A Basic Look at the Effect of temperature on the permeability of beetroot membrane Analysis The graph shows the colorimeter readings increase as the temperature increases, they increase by the most at higher temperatures. This is shown by a smooth curve. This means that the beetroot samples release more dye at higher temperatures. This is because higher temperatures cause the membrane structure to break down. The membrane structure: Membranes have two layers of molecules called phospolipids to make up their structure. Phospholipis consist of a glycerol molecule plus two molecules of fatty and a phosphate group, this looks like a head with two legs, their head is attracted to water, this means they're hydrophilic. The rest of the lipid (the fatty acid legs) is hydrophobic, which means they repel water. In aqueous solutions the phospolipids automatically arrange themselves into a double layer so that the hydrophobic legs are packed inside the membrane (away from the water) and the hydrophilic heads face outwards into the aqueous solutions. ...read more.

Enzymes are always denaturing, but at higher temperatures this occurs more rapidly. But at higher temperatures there are more collisions between the substrate and the active site so this would increase the reactivity, so a good balance must be found. The optimum temperature is about 43�C, this is called the optimum temperature. As the proteins start to break down, there is no longer a barrier to the cell The lipids in the bi-layer are slightly more stable than the proteins but 'melt' and breakdown at higher temperatures too. This in effect creates 'holes' in the membrane. Also the membrane is in part held together by the interaction of proteins and lipids with the cell's cytosceleton. These also fall apart as the temperature is raised making the membrane more permeable. This means that diffusion can take place easier. Diffusion Diffusion is the passing of molecules through a membrane, from a high concentration to a low concentration. In the experiment the beetroot dye (betalain pigments) ...read more.

Error Reduction/Relative Influence The Instructions should be improved by adding these points - Have everyone shake the tubes moderately for 10 seconds only at given times. - Make everyone wash the beetroot until the excess dye is completely washed off (at least for three minutes) - Everyone should vary the place in the beetroot they extract the cylinders from to be cut - The classes cylinders should all be cut by the teacher (or any other person) to ensure there is minimal variation between the thickness of the discs. Conclusion The experiment was successful as it clearly showed the effect of temperature on the beetroot membrane. It showed that the membrane becomes more permeable at higher temperatures, as was expected. This was explained by the fact that proteins denature with high temperatures and the phospholipids structure changes and becomes less stable, having devastating results on the membrane structure. Despite the limitations and errors, the results of the experiment were conclusive. (c)Hugh Howlett 2005 Written by Hugh Howlett, Cheltenham College, England. ...read more.