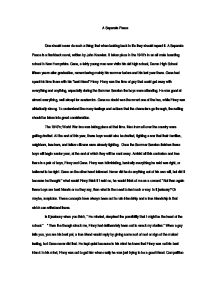 A Separate Peace by John Knowles - summary of theme and narrative

A Separate Peace One should never do such a thing; that when looking back in life they should repent it. A Separate Peace is a flashback novel, written by John Knowles. It takes place in the 1940's in an all male boarding school in New Hampshire. Gene, a fairly young man now visits his old high school, Devon High School fifteen years after graduation, remembering mainly his summer before and his last year there. Gene had spent his time there with his "best friend" Finny. Finny was the time of guy that could get away with everything and anything, especially during the Summer Session the boys were attending. He was good at almost everything, well except for academics. Gene no doubt was the smart one of the two, while Finny was athletically strong. To understand the many feelings and actions that the characters go through, the setting should be taken into great consideration. The 1940's; World War two was taking place at that time. Men from all over the country were getting drafted. ...read more.

But if that was the case than why is it that when Finny beat the school swimming record in front of Gene he did not want to tell others? If he wanted to look better than Gene then that would have been the best opportunity. When Finny drags Gene everywhere he assumes it's because he wants to sabotage his studies, when really Finny just wants to spend all his exciting moments with his best friend, he wants to share it with Gene and no one else, which Gene mistakes for something else. Mistakes, an everyday part of life. Some are big yet some are small but it's the mistakes in friendship that leave a huge imprint behind in our lives, which we never tend to forget. Gene made one of those same mistakes by causing Finny to fall of the branch of a tree by jouncing the limb. These boys had formed a Super Suicide Society of the Summer Session. In this club they were to jump into the riverbank off of a high branch on a fairly high tree. ...read more.

Finny didn't want to believe that his best friend would do such a thing to him and Gene did not want to admit that he had done it. Gene had made a mistake that would leave an impact on him for the rest of his life. During the operation, Finny died. Gene was not affected though. He had started out with nothing and ended up with nothing; even though everything was there for him, he chose to ignore it. True friendship is hard to find and once found shouldn't be lost. Gene did everything he could for himself, he never thought of the people around him. Finny was a great friend and Gene never understood that or took into consideration what Finny was doing wasn't for himself; atleast not until after he was gone. Even fifteen years later, looking back onto his life, Gene realizes that he had lost the greatest friend he would ever find, the friend that would teach him what true friendship would is, but he was gone, all because of Gene. Never do anything, which you will later regret when looking back on. Has that ever happened to you? Now put yourself in that position, how would you have felt? ...read more.