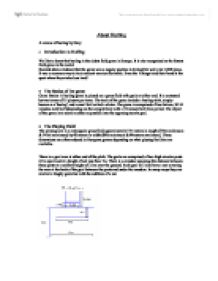 A review of hurling by Gary

We like to boast that hurling is the oldest field game in Europe. It is also recognised as the fastest field game in the world.
Records show evidence that the game was a regular pastime in Ireland for well over 2,000 years. It was a common way to train ancient warriors for battle. Even the Vikings tried their hand at the sport when they visited our land!

Game Basics: A hurling game is played on a grass field with goals at either end. It is contested by two teams of 15 players per team. The tools of the game include a hurling stick, simply known as a 'hurley', and a small ball called a sliotar. The game is comprised of two halves, 30-35 minutes each half (depending on the competition) with a 10 minute half-time period. The object of the game is to score as often as possible into the opposing team's goal.

Each game is contested by two teams. Each team has a total of 15 players (sometimes reduced in European games) and is allowed a maximum of five substitutions during the game. In the case of extra-time three more substitutions are allowed. Both teams wear their registered distinctive team colours, and if both teams have similar colours they must change to their alternative colours. In the case of the goalkeepers, they must wear a colour different to that of their own team and of the other team.

Unlike sports such as soccer for example, in hurling the teams normally line-out in a stricter format much like this:

The two basic items a player uses in hurling is a hurley stick, camán in Irish and a sliotar (ball). The hurley stick varies quite a lot in length, and depends pretty much on the person using it.

Tackling: Players may tackle each other to get the ball. Usually this will involve a shoulder charge on the player in possession of the ball or if you are competing against another player chasing a ball. Quite often tackles can be vigorous as hurling is a very physical game. However challenges deemed as dangerous will be punished.