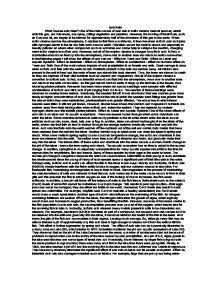 Acid Rain What Causes Acid Rain? One of the main causes of acid rain is sulfur dioxide. Natural sources, which emit this gas, are Volcanoes, sea spray, rotting vegetation and plankton. However, the burning of fossil fuels, such as Coal and oil, are largely to be blamed for approximately half of the emissions of this gas in the world. When sulfur dioxide reaches the atmosphere, it oxidizes to first form a sulfate ion. It then Becomes sulfuric acid as it joins with hydrogen atoms in the air and falls back down to earth. Oxidation occurs the most in clouds and especially in heavily polluted air where other compounds such as ammonia and ozone help to catalyze the reaction, changing more sulfur dioxide to sulfuric acid. However, not all of the sulphur dioxide is changed to sulfuric acid. In fact, a substantial amount can float up into the atmosphere, move over to another area and return to earth unconverted. In the following pages I will show the effects of acid rain on: � Effect on Trees and Soils � Effect on Lakes and Aquatic Systems � Effect on Materials � Effect on Atmosphere � Effect on Architecture � Effect on Humans Effect on Trees and Soils One of the most serious impacts of acid precipitation is on forests and soils. ...read more.

Subsequently, sulfuric acid in water can affect the fish in the lakes in two ways: directly and indirectly. Sulfuric acid (H2SO4) directly interferes with the fish's ability to take in oxygen, salt and nutrients needed to stay alive. For freshwater fish, maintaining osmoregulation is key in their survival. Osmoregulation is the process of maintaining the delicate balance of salts and minerals in their tissues. Acid molecules in the water cause mucus to form in their gills and this prevents the fish to absorb oxygen as well. If the buildup of mucus increases, the fish would suffocate. In addition, a low pH will throw off the balance of salts in the fish tissue. Salts levels such as the calcium (Ca+2) levels of some fish cannot be maintained due to pH change. This results in poor reproduction - their eggs produced would be damaged; they are either too brittle or too weak. Decreased Ca+2 levels also result in weak spines and deformities. For example, crayfish need Ca+2 to maintain a healthy exoskeleton; low Ca+2 levels would mean a weak exoskeleton. Another type of salt N+ also influences the well-being of the fish. As nitrogen- containing fertilizers are washed off into the lakes, the nitrogen stimulates the growth of algae, which logically would mean and increase in oxygen production, thus benefitting the fish. ...read more.

Limestone and marble turn to a crumbling substance called gypsum upon contact with the acid, which explains the corrosion of buildings and statues. In addition, bridges are corroding at a faster rate, and the railway industry as well as the airplane industry have to expend more money in repairing the Corrosive damage done by acid rain. Not only is this an economically taxing problem caused by acid rain, but also a safety hazard to the General public; as an illustration, in 1967, the bridge over the Ohio River collapsed killing 46 people - the reason? Corrosion due to acid rain. Effects On Humans Among one of the serious side effects of acid pollution on humans is respiratory problems. The SO2 and NO2 emmisions give rise to respiratory problems such as asthma, dry coughs, headaches, eye, nose and throat irritations. An indirect effect of acid precipitation on humans is that the toxic metals dissolved in the water are absorbed in fruits, vegetables and in the tissues of animals. Although these toxic metals do not directly affect the animals, they have serious effects on humans when they are being consumed. For example, mercury that accumulate in the organs and tissues of the animals has been linked with brain damage in children as well as nerve disorders, brain damage and death. Similarly, another metal, Aluminium, present in the organs of the animals, has been associated with kidney problems and recently, was suspected to be related to Alzheimer's disease. ...read more.