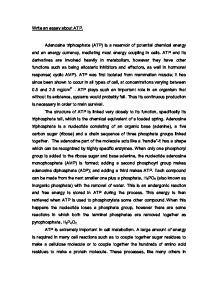 Adenosine triphosphate (ATP) is a reservoir of potential chemical energy and an energy currency, mediating most energy coupling in cells.

Write an essay about ATP. Adenosine triphosphate (ATP) is a reservoir of potential chemical energy and an energy currency, mediating most energy coupling in cells. ATP and its derivatives are involved heavily in metabolism, however they have other functions such as being allosteric inhibitors and effectors, as well in hormonal response( cyclic AMP). ATP was first isolated from mammalian muscle; it has since been shown to occur in all types of cell, at concentrations varying between 0.5 and 2.5 mg/cm3 . ATP plays such an important role in an organism that without its existence, systems would probably fail. Thus its continuous production is necessary in order to main survival. The structure of ATP is linked very closely to its function, specifically its triphosphate tail, which is the chemical equivalent of a loaded spring. Adenosine triphosphate is a nucleotide consisting of an organic base (adenine), a five carbon sugar (ribose) and a chain sequence of three phosphate groups linked together. The adenosine part of the molecule acts like a 'handle"-it has a shape which can be recognized by highly specific enzymes. When only one phosphoryl group is added to the ribose sugar and base adenine, the nucleotide adenosine monophosphate (AMP) is formed; adding a second phosphoyrl group makes adenosine diphosphate (ADP); and adding a third makes ATP. ...read more.

ATP hydrolysis is favoured i.e. it has a strong tendency to transfer its terminal phosphoryl group in the presence of an appropriate catalyst(ATPase), a reaction associated with the release of 30.5 kj mol-1 of ATP. There are many reasons for this tendency: firstly, the repulsion between the four negative charges in ATP4- is reduced because two negative charges are removed with phosphate; secondly, the H+ ion which is released when ATP is hydrolysed reacts with the OH- ions to form water- this is a highly favoured reaction. Also the charge distribution on ADP +Pi is more stable than that on ATP. ATP is the central molecule in metabolism. ATP is important not just for driving biosynthetic reactions such as nitrogen fixation and bioluminescence; it is also used as a source of energy for virtually all kinds of movements, including small motions of cellular structures, locomotion of single cells and muscle contraction, where ATP hydrolysis changes the position of the myosin 'head" relative to actin, It also supplies energy for the transport of ions and molecules across cell membranes and so it underlies the whole activity of the nervous system. Active transport systems are driven by the phosphorylation of membrane-bound proteins. In urea synthesis, ATP hydrolysis drives the ornithine cycle which removes toxic ammonia. ...read more.

The enzyme catalyzing the hydrolysis of ATP to ADP and Pi occurs in the membrane. The hydrogen ions are able to pass back across the membrane, through a channel in the ATPase. Flow of hydrogen ions through this channel causes reversal of ATP hydrolysis. Thus although an organism at work uses ATP continuously, ATP is a renewable resource that can be regenerated by the addition of phosphate to ADP. This ATP cycle moves at an astonishing pace. For example, a working muscle cell recycles its entire pool of ATP about once each minute. That turnover represents 10 million molecules of ATP consumed and regenerated per second per cell. In conclusion, the production of ATP can never cease, for energy is needed to drive cellular work, be it chemical, mechanical or transport since the immediate source of energy that powers cellular work is ATP. Cellular reactions, without the free energy to kick start, will take place too slowly to sustain life. It is such an important molecule that no other molecule can replace its functions in an organism. Done by : Stephanie Ow Class: 2S03A Group 1 Comments: this is a well written essay which covers the important details about ATP from its structure, function and its other non energy coupling roles. In the actual essay it would be good to include a diagram of ATP and the coupling to illustrate your point but you did give a good written description. Well done. ...read more.