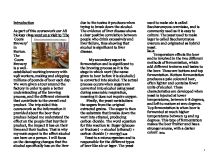 Affects of Alcohol on the Body &amp; Fermentation

Introduction As part of this coursework our AS biology class went on a visit to 'The Coors Brewery' in Burton. The Coors Brewery is a well- established working brewery with 298 workers, making and shipping millions of pounds of beer each day. We were given a tour around the factory in order to gain a better understanding of the brewing process, and the different elements that contribute to the overall end product. The trip aided this coursework as the information it provided about the beer they produce helped me understand the effect on the people that buy their product, the impact it has on their lives and their bodies. That is why my main aspect is the affect alcohol can have on a person. I will focus on the damaging changes that the alcohol specifically has on the liver due to the toxins it produces when trying to break down the alcohol. The evidence of liver disease shows a clear positive correlation between people who drink excessively and liver failure, thus showing that alcohol is significant to liver disease. My secondary aspect is fermentation and is significant to the brewing process as it is the stage in which wort (the name given to beer before it is alcoholic) ...read more.

* Confusion and trouble with fine movement These side effects often occur soon after drinking, as cell membranes are very permeable to alcohol. This is because alcohol contains polar and non-polar regions, which allow it to dissolve easier through the bilayer of the membrane. Due to the easy absorption from cells, alcohol can reach almost every tissue in the body Ref 3. However, these are short term consequences of drinking. There are more serious implications of drinking excessively over a long period of time. If someone was to drink 5-6 standard drinks each day for the next 20 years, it is highly likely they would develop liver disease Ref 4 The red section on the pie chart shows the percentage of cases of liver disease caused by excess alcohol consumption Image 2- Causes of liver disease The liver is the organ that breaks down 90% of alcohol consumed, with the remaining 10% excreted through urine or in breath Ref 10. The start of liver disease occurs when the liver tries to break down alcohol by the use of the enzyme dehydrogenase. This enzyme catalyses the oxidation of ethanol into acetaldehyde. ...read more.

It also means that livers can be produced on demand and there never has to be a shortage. The implications of therapeutic cloning are that alcoholics may acquire a complacent attitude and think it's okay to drink because they will be given a new liver. This is a wrong attitude to have as alcohol has effects on not just the liver but the rest of the body too. There are also ethical issues raised on whether cloning organs is morally right, this is because the original ovum and the pre-embryo are a form of human life. It asks questions on whether embryos are alive from conception and if they posses any potential rights. However, recent breakthroughs in stem cell research may avert this controversy, as stem cells can be grown from adult skin cells. Ref 14 Limitations There is however limitations with the information I have gathered. This is due to statistics being out of fate and published from over five years ago. This means the information many not be as reliable, and cannot give a clear understanding or a current risk in times today. Fore example the pie chart (image 2) was published in 1989, and since then it is highly likely that the amount of cases of alcohol induced liver damage has increased, thus affecting the reliability. ...read more.