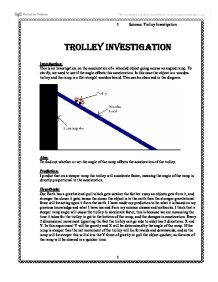 Aim:To find out whether or not the angle of the ramp affects the acceleration of the trolley.

Introduction:
This is an investigation on the acceleration of a wheeled object going across an angled ramp. To clarify; we need to see if the angle effects this acceleration. In this case the object is a wooden trolley and the ramp is a flat straight wooden board. This can be observed in the diagram.

Aim:
To find out whether or not the angle of the ramp affects the acceleration of the trolley.

Prediction:
I predict that on a steeper ramp the trolley will accelerate faster; meaning the angle of the ramp is directly proportional to the acceleration.

Hypothesis:
Our Earth has a gravitational pull which gets weaker the further away an objects gets from it; and stronger the closer it gets; hence the closer the object is to the earth then the stronger gravitational force will be acting upon it from the earth. I have made my prediction to be what it is based on my previous knowledge and what I have learned from my science classes and textbooks. I think that a steeper ramp angle will cause the trolley to accelerate faster; this is because we are measuring the time it takes for the trolley to get to the bottom of the ramp; and the changes in acceleration.

Here are the steps to this investigation:

Set up the apparatus as shown:

I can also prove this mathematically because in my previous hypothesis the mass was cancelled out, hence it does not play a part in the experiment:
Fχ = w x sinθ, I already know that f=ma; which is equivalent to f=maχ. I am also aware that fχ=wxsinθ, thus meaning maχ=wxsinθ. And since w=mg, this can be substituted into this equation: maχ=wxsinθ, which then changes into mgχ=mgxsinθ, as mass is on both sides of the equation; it might as well not be there; so it is cancelled out. This leave me with the equation for acceleration: aχ=gxsinθ.

The method in this experiment is the same as the one used previously:

1.) Set up equipment as before:

2.) Feed some ticker tape into the ticker timer; ensure that there is a bit more than the length of the ramp.

3.) Connect the PowerPack to the mains outlet and to the ticker timer.

4.) Ensure that everything is the same as before; except the main variable (in this case it’s the extra weights added to the trolley instead of the change of ramp angle)

On the whole, the writer of the experiment is succesful in answering his aim and gives great detail on how to replicate his experiment. There are a few problems, for instance he states that two things positively correlate so they ...

On the whole, the writer of the experiment is succesful in answering his aim and gives great detail on how to replicate his experiment. There are a few problems, for instance he states that two things positively correlate so they are 'directly proportional' which isn't necessarily true, this case being an example of that. I also think the hypothesis is quite drawn out, and inconcise - the reference to gravity on earth has little relevance to the actual question being asked. The writer also says that the trigonometry being used is derived by pythagoras, which is untrue (and frankly - quite irrelevant).

Some explanations seemed forced and much beneath the level needed; writing such things as '0.2 and 1/5 are the same'. The write starts writing units in the table but then seems to give up half way through - leaving an incomplete table. The conclusion is good, identifying anomalous results and giving reasons for them. The extra effort put into showing that mass had no effect was good to see - but the explanation was basic (acceptable at the start of year 12 prior to studying mechanics but otherwise it's lacking heavily) and just a little guidance on how to check that the experiment was doing what it should would be very helpful. It was good to see air resistance explained a little but it could be developed more to say how it is neglibible and so that is the reason it isn't being taken into account.

The diagrams are well drawn and quite clear - but it would help if the angle being changed was annotated. The use of 'something else' to denote an object which the ramp is propped up on is just lazy. They should have also labelled the forces acting on the block in the second picture. The mini graph sketches have no explanation behind them - they should either have more detail or be left out altogether. I am confused by the use of 'c' in equations and saying things like 'I am aware that f=ma is the same as f=mac' - a key is given for each letter apart from c which is certainly the most ambiguous one - I don't know what they're trying to represent with it. Overall I thought the experiment write-up was of a good quality and produced a solid conclusion but it should have been read over to check no information was missing; it seems a little unfinished.