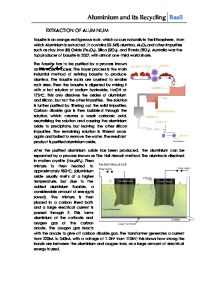 Aluminium and its Extraction

EXTRACTION OF ALUMINIUM Bauxite is an orange-red igneous rock, which occurs naturally in the lithosphere, from which Aluminium is extracted. It contains 30-54% alumina, Al2O3 and other impurities such as clay, Iron (III) Oxide (Fe2O3), Silica (SiO2), and Titania (TiO2). Australia was the top producer of bauxite in 2007, with almost one-third world share. The Bauxite has to be purified by a process known as The Bayer Process. The Bayer process is the main industrial method of refining bauxite to produce alumina. The Bauxite rocks are crushed to smaller rock sizes. Then the bauxite is digested by mixing it with a hot solution of sodium hydroxide, NaOH at 175oC. This only dissolves the oxides of aluminium and silicon, but not the other impurities. The solution is further purified by filtering out the solid impurities. Carbon dioxide gas is then bubbled through the solution, which creates a weak carbonic acid, neutralising the solution and causing the aluminium oxide to precipitate, but leaving the other silicon impurities. The remaining solution is filtered once again and boiled to remove the water. The resultant product is purified aluminium oxide. After the purified aluminium oxide has been produced, the aluminium can be separated by a process known as The Hall-Heroult method. ...read more.

Another factor is the size of the ore body, it needs to be large enough to make sure that profitcs can be made, small ore-bodies may not even cover the start up costs. - The Concentration of metal in the ore body . A large high-grade ore body is economical to mine becuase it conctains a high concentration of the metal in the ore. Some low-grade (i.e. low concentration) deposits may still be economoical to mine if they are large enough and suitably located. Another way low-grade and uneconomical mines becomes efficient if new technologies are invented. The more lower concentration, the more expensive it is to mine. - Mining companies may need to build a railway line from the mining site to the cost, to be able to export the metal extracted. The more remotely located the mine, the greater cost in production. - The cost of producing alumiinium isalso based on how much money was intitially spent on initiaiting the mining operation. This includes the costs of exploration, the establishmnet of the extraction plant (purchasing of machinery and sites for disposal of waste). There are also ongoing costs such as miner's saleries and housing for their families. ...read more.

Hence less green house gases are released since the fuel is being used at a decreasing rate. Recycling aluminium c**p to create cars means that approximately 95% of greenhouse gas emissions are saved. In the recycling of aluminium, the smelting process needs about 65000 MJ of energy, unlike recycling which only requires 800 MJ. There is no need for combustion reactions, or electrolysis in the recycling processes, thus the major energy usages in the extraction of metals is saved. This leads directly to the next important reason to recycle metal. Metals like aluminium are a non-renewable resource as they take many thousands even millions of years to form. Aluminium is widely used in modern society because of both its physical and chemical properties. The main physicals properties of aluminium are that it is cheap (mainly because of its abundance) and that is light and malleable. Aluminium also is relatively unreactive compared to other metals, because of the oxide layer that is formed on top. The most common use of aluminium is in soft drink cans, because it is readily rolled, lightweight, odourless, and tasteless and it conducts heat away from the drink so it can be chilled. As more aluminium is recycles that means that less mines are needed, so that means less fluoride compounds are released during the production of aluminium. ...read more.