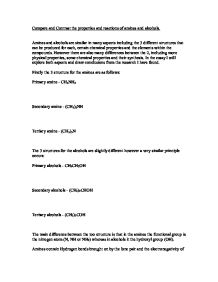 Compare and Contrast the properties and reactions of amines and alcohols. Amines and alcohols are similar in many aspects including the 3 different structures that can be produced for each, certain chemical properties and the elements within the compounds. However there are also many differences between the 2, including more physical properties, some chemical properties and their synthesis. In the essay I will explore both aspects and draw conclusions from the research I have found. Firstly the 3 structure for the amines are as follows: Primary amine - CH3NH2 Secondary amine - (CH3)2NH Tertiary amine - (CH3)3N The 3 structures for the alcohols are slightly different however a very similar principle occurs: Primary alcohols - CH3CH2OH Secondary alcohols - (CH3)2CHOH Tertiary alcohols - (CH3)3COH The main difference between the too structure is that in the amines the functional group is the nitrogen atom (N, NH or NH2) whereas in alcohols it the hydroxyl group (OH). ...read more.

However, they don't replace them by anything as strong, and so the process of forming a solution becomes less and less possible as chain length grows. The solubility of the alcohols is the same however the nitrogen is replaced by oxygen which has the same effect. The intermolecular bonding in alcohols is strong as more energy is required to break the two types of bonding. They therefore have high melting and boiling points. In the amines the boiling and melting points are relatively low and the boiling point decreases when looking at primary, secondary and tertiary amines respectively. Due to the weakening of the hydrogen bonding as the structure becomes more complex. Alcohols can show properties of either acids or bases with the O-H group. The oxygen atom has lone pairs of electrons that allow it to be a weak base in the presence of strong acids. Amines also act as bases and are reasonably strong. ...read more.

Oxidation - primary alcohols are oxidised to form aldehydes and then carboxylic acids, secondary alcohols are oxidised to form ketones, however tertiary alcohols cannot be oxidised. Another physical property of the amines that the alcohol do not have is such a distinct odour, the amines smell of decay and rotten fish which helps them to be easily recognised. The alcohols are much stronger bases than amines. Amines can act as bases and nucleophiles in reactions whereas alcohols can act only as bases under standard conditions. They also have very different uses the alcohols being used for: - industrial feedstock - to help make other substance - as a fuel - when they burn they produce carbon dioxide and water - as a solvent - in perfumes and cosmetics - as methylated spirits Whereas the amines are used for: - Dyes - azo dyes are used widely in the industry - Drugs - tranquilizers and antihistamines - Gas treatment - removal of CO2 Both the alcohols and amines are toxic to a certain degree when ingested. Different volumes and concentrations of each effect the human body. ...read more.