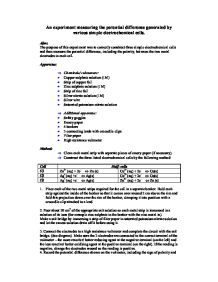 The purpose of this experiment was to correctly construct three simple electrochemical cells and then measure the potential difference, including the polarity, between the two metal electrodes in each cell.

2. Pour about 20 cm3 of the appropriate salt solution so each metal strip is immersed in a solution of its ions (for example zinc sulphate in the beaker with the zinc metal in).

Make a salt bridge by immersing a strip of filter paper in saturated potassium nitrate solution and let the excess solution drain off it before using it.

3. Connect the electrodes to a high resistance voltmeter and complete the circuit with the salt bridge. (See diagram). Make sure the 2 electrodes are connected to the correct terminal of the voltmeter – the more reactive/ better reducing agent at the negative terminal (on the left) and the less reactive/ better oxidising agent at the positive terminal (on the right). If the reading is negative, change the electrodes around so the reading is positive.

4. Record the potential difference shown on the voltmeter, including the sign of polarity and note which electrode was positive and which was negative.

5.Remove the salt bridge as soon as possible and dispose of it. Disconnect the voltmeter.

6.Repeat these steps for the other 2 cells.

The equilibrium at the zinc electrode is:

This is more to the left, so the reaction, when the 2 half cells are connected, is effectively an oxidation one:

The equilibrium at the copper electrode is:

This is more to the right, so the reaction, when the 2 half cells are connected, is effectively a reduction one as the copper is reduced by the zinc:

The reaction to make the copper electrode negative is the oxidation reaction as follows:

The reaction to make the zinc electrode negative is the oxidation reaction as follows:

The function of the salt bridge:

It also keeps the cells neutral by the following methods: (using cell (1) as an example)

Due to the increased concentration of positive Zn2+ ions (when the electrons released from the zinc leave to reduce the copper half cell) in the left hand half cell, negative NO3- ions flow from the salt bridge into the solution to balance the increased positive charge.

Due to the decreased concentration of the Cu2+ ions in the right hand half cell, and so due to electrons arriving from the zinc half cell, positive K+ ions flow into the copper half cell, to replace “lost” positive charge/ to compensate for the increased negative charge.

We first measured the potential difference of the typical cell, the Daniel cell: a cell consisting of zinc in a solution of its ions and copper also in a solution of its ions and found the zinc electrode to be negative and the copper electrode to be positive so that the measured potential would read a positive polarity (and so indicating that the reactions were feasible). This can easily be explained in terms of the standard electrode potentials of the two metals and their relative positions in the electrochemical series. When the standard electrode potential of zinc metal is measured by coupling a zinc half-cell with the standard hydrogen half-cell (which is given a value of 0) under standard conditions, the measured electrode potential is negative. This negative value indicates that the equilibrium of the zinc electrode, Zn2+ (aq) + 2e-⇔ Zn (s), lies more to the left compared to the hydrogen equilibrium (2H+ + 2e- ⇔ H2) and consequently it is more negative in relation to hydrogen and is more likely to ionise and lose electrons, i.e. it is easily oxidised and is a better reducing agent than hydrogen. When the standard electrode potential of copper is measured, however, the polarity of the potential reads positive as the equilibrium at the copper electrode, Cu2+ (aq) + 2e-  ⇔ Cu(s), lies more to the right compared to hydrogen and so it is less likely to oxidise and form its ions than hydrogen and so is a better oxidising agent than hydrogen.

As zinc is more negative compared to hydrogen and copper is more positive, zinc is above copper in the electrochemical series, a series constructed from the standard electrode potentials of substances as its equilibrium lies more to the left than coppers. This means that when zinc and copper half cells are coupled together to make a cell, zinc will be oxidised and release electrons which will flow to the copper electrode, reducing the copper. The overall reaction, Zn (s) + Cu2+ (aq)        Zn2+ (aq) + Cu(s), is favourable for both species as zinc is more easily oxidised and copper is more easily reduced.

This theory can be applied to the other two cells we constructed. In cell (2) a copper half cell is coupled to a silver half cell. Here the copper was the negative electrode and the silver was the positive for the feasible reaction to occur. This was because copper is above silver in the electrochemical series as its standard electrode potential is more negative compared to silver (although it is, of course, more positive compared to hydrogen so its sign is positive) and its equilibrium at the electrode lies more to the left than silver’s. This means in this reaction copper is being oxidised and electrons flow from it to reduce the silver. The overall reaction was:

Cell (2) is the same but this time a zinc half cell is coupled to a silver half cell and here the zinc electrode was negative and the silver was positive as zinc is above silver in the electrochemical series, it is more easily oxidised and electrons flow from zinc to reduce the silver. The overall reaction here was:

From official recorded values the standard electrode potentials of the metals we used were as follows:

So to determine the accuracy of our results I can work out the cell potentials from these known values and compare them to my measured values.

My measured value was + 1.06 V which is close to the actual value.

My measured value was + 0.38 V, which is not as close to the actual value as cell (1) but it is still quite accurate.

My measured value was + 1.35 V, which is quite close to the actual value.

I think my results were reasonably accurate, but any inaccuracy could have been due to the simplicity of the apparatus we used, the voltmeter letting some current flow, although it is high resistance, and so the value not being the actual difference between the two potentials of the half cells and also perhaps the reading not being read early enough.

If I were to do this experiment again I would perhaps try a different voltmeter with a higher resistance or use a different chemical for the salt bridge, such as potassium chloride, or construct the salt bridge differently by, for example, using a glass tube and then I would see if any of these changes made my results more accurate.

From measuring the potential differences of the three simple electrochemical cells, I can conclude various main points which I will continue to discuss in my evaluation to follow:

At the negative electrode an oxidation reaction is occurring and electrons are being released to reduce the metal at the positive electrode.

All the cells had a positive measured potential difference, indicating their reactions were spontaneous/ feasible.

A salt bridge is used to complete the circuit and keep the half cells neutral. This consists of filter paper soaked in a substance that doesn’t react with the solutions in the half cells, such as, in this case potassium nitrate solution.