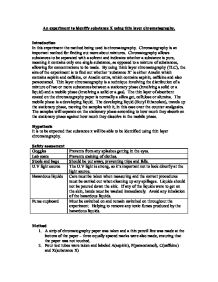 Helping to remove any toxic fumes produced by the hazardous liquids. Method 1. A strip of chromatography paper was taken and a thin pencil line was made at the bottom of the paper - three equally spaced marks were also made, ensuring that the paper was not touched. 2. Four test tubes were taken and labeled A(aspirin), P(paracetamol), C(caffeine) and X(substance X) 3. 1-2cm� of the drug solvent (Ethanol) was added to each tube. Then carefully shaken from side to side, to ensure the drug samples were dissolved. 4. A spot of solution from each of the drug samples were carefully placed on the chromatography plate using a fresh capillary tube each time. This was repeated three times to ensure enough of the drug sample was placed on the chromatography plate and was then allowed to dry in fume cupboard. 5. 0.5 - 0.75cm� of the developing solvent (Butyl Ethanolate) was poured into a beaker - ensuring that the solvent does not touch the pencil line drawn on the bottom of the plate. Foil was then placed on top of the beaker. ...read more.

Substance X (anadin extra) however had a mixture of the tested substances on the chromatography paper, proving that it was not a pure substance. There was extra spotting on the chromatography paper, which were highlighted by the UV light. These results were anomalies, and were invalid results. Evaluation If the experiment was to be carried out again I would not use capillary tubes, because they are very fine and break easily. Instead I would use a wider piece of chromatography paper and use a drop of solution from a pipette. This would also ensure that the results would be more accurate removing the risk of any anomalous results, as you would be able to ensure that the substance hit the mark correctly, whereas, with the capillary tubes it was needed to be repeated several times to ensure it was place on the chromatography plate. Another change I would make in the experiment is that I would use a larger test tube, or even a small beaker. By doing this you would be able to stir the analgesic, ensuring that it has fully dissolved in the drug solvent. ...read more.