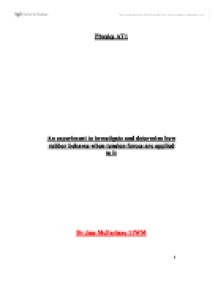 An experiment to investigate and determine how rubber behaves when tension forces are applied to it.

The initial aim of my experiment is to investigate how rubber behaves when tension forces are applied to it. I also intend to figure out why this happens so that the data that I am provided with will help me to analyse what I plan to write about during this set coursework. For the actual experiment I will be using a rubber band, as this is an easier and less complex way of carrying out the investigation.

When a sample of material in the form of rubber, such as in this case, is pulled so as to apply a tension force, the sample would become longer in size. And the difference between the new length of the sample and its existing length, when there was no tension applied to it, this is called the extension of the particular sample. Tension is a force that is applied to an object of material that is able to change in size, for example, these types of materials could be used, rope, springs, rods, wires and in this particular case rubber.

Tension is the name given to a force, which acts through a stretched sample or object e.g. when a pulling force is applied at each end of the rope, it is said to be under tension.

Extension occurs in this experiment as well. A definition of extension is when an object such as rubber is stretched and the extension is the difference in the original length and the new length. The diagram below shows this more clearly.

I wish to include extension in my experiment, as I think that it will help me to analyse my data better.

I would have carried on adding weights but I also observed the results, which I took were changing. It was evident to me that after a certain point from where the rubber band was being stretched by too much weight, the extension was not following a certain pattern as it was before. I was led to believe that from my introduction that the rubber band was no longer following Hooke’s Law. This means that if I am to say this that means that the results at the beginning of the experiment did not apply Hooke’s Law and that only up until a certain point did they start to and up to a certain point in my results where they finished.

It is a bit hard for me to say though whether I was correct in saying that after 10N or the equivalent of 1kg of load was added to the rubber band that it did in fact deform and its properties changed. I can though assume this happened as my results did change but it is impossible to fully prove this prediction as I did not optimise my method fully due to a lack of time.

I can finally conclude the experiment by saying that it ran rather accordingly to plan. I thought that the data I collected was relevant to what I predicted and then evaluated and that the final practical was performed efficiently, without me needing to change many things. I learnt a lot about Hooke's law and elastic limits as a result of this investigation and I feel it was worthwhile and helpful to me, as I now understand about elastic limits better.

I can also conclude that rubber behaves in different ways when a force such as tension is applied to it. Rubber bands follow certain characteristics that other materials that apply Hooke’s Law don’t. This although is a little crude as only in certain ways does a rubber band apply Hooke’s Law and I have tried to fully explain this above. The set of data I collected to follow a certain pattern, which could be followed but again only in some circumstances.

I was in fact actually surprised by results in one way because after 1.1kg or 11N/kg was added to the rubber band it did not break and so I did not fully find out how much tension it could actually take. I do not think this would have made any difference to my results though.