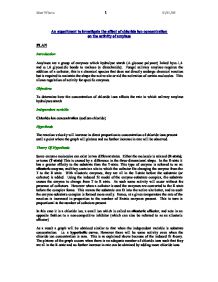 An experiment to investigate the effect of chloride ion concentration on the activity of amylase PLAN Introduction Amylases are a group of enzymes which hydrolyse starch (A glucose polymer) linked by ?-1,4 and ?-1,6 glycosidic bonds to maltose (a disaccharide). Fungal salivary amylase requires the addition of a cofactor, this is a chemical species that does not directly undergo chemical reaction but is required to maintain the shape the active site or aid the activation of certain molecules. This allows regulation of activity for specific enzymes. Objectives To determine how the concentration of chloride ions affects the rate in which salivary amylase hydrolyses starch Independent variable Chloride ion concentration (sodium chloride) Hypothesis The reaction velocity will increase in direct proportion to concentration of chloride ions present until a point where the graph will plateau and no further increase in rate will be observed. Theory Of Hypothesis Some enzyme molecules can exist in two different states. Either the molecule is relaxed (R-state), or tense (T-state) This is caused by a difference in the three-dimensional shape. In the R-state it has a greater affinity to the substrate than the T-state. This type of enzyme is referred to as an allosteric enzyme, and they contain a site to which the cofactor fits changing the enzyme from the T to the R state. With allosteric enzymes, they are all in the T-state before the substrate (or cofactor) is added. Using the induced fit model of the enzyme-substrate complex, the substrate causes the enzyme to change from T to R state. As such some activity will occur without the presence of cofactors. ...read more.

The pH affects the reaction velocity by ionisation of the side chain when the pH varies from it's optimum. This changes the shape of the active site, and high or low pH causes the enzyme to denature. Amylase concentration must remain the same for each experiment. This can be achieved using a fixed volume of a set concentration of amylase in each experiment. This must be maintained as an increased/decreased number of enzymes in solution will cause an increase/decrease in reaction velocity irrespective of whether they are in the R-state or T-state. Initial starch concentration again must be maintained for each experiment. As above a change in starch concentration will change the rate of the reaction due to an increased number of collisions between enzyme and substrate. A set volume and concentration can be used to maintain this variable. Temperature will be kept at a constant and known level throughout all the experiments. This can be done by placing the test tubes of enzyme and substrate in a water bath which is at room temperature. The high specific heat capacity of water will compensate for any small changes in room temperature that occur during the experiment. The test tubes will be left in the water bath for a minimum of 5 minutes prior to the beginning of the experiment. The effect of temperature is to increase the kinetic energy of the enzyme and substrate thereby increasing the number of successful collisions and increasing the reaction velocity. Hence it must be kept constant. No inhibitors / other promoters will be used . ...read more.

Using the iodine method the change in colour is often very slow, particularly in the reactions with a low concentration of chloride ions the difference in colour over a 15 second interval is almost undistinguishable. It is also possible that the perception of the endpoint colour could change over the span of several days in which the experiments took place. This could account for the apparent increase in rate from one day to the next. Another possible source of error could be from the solutions of amylase. The powdered form used was several years old and its activity may have diminished unevenly throughout. As a result of this the solutions used may have varied, and although the up-most care was taken to accurately produce consistent solutions, variation is most probable. In the time available a repeat of each experiment was possible which further validates the conclusions in the above analysis, however at least one more repeat would be suitable to provide proof that the trend described is correct. Overall it is possible to say that the experimental evidence is adequate to corroborate the conclusions made above. Further work to be considered other than repeating the experiment, would be to quantify the numbers of enzymes present in solution by calculating the relative molecular mass, and consequently analysis of the numbers of active sites present per enzyme molecule. This would also allow specific calculations of the equilibrium constant 'L' (the ratio of R - T state enzymes) to be made. Other allosteric proteins should also be investigated such as human haemoglobin to confirm that the hypothesis relates to all allosteric enzyme. ?? ?? ?? ?? Matt Wilson 1 01/01/02 ...read more.