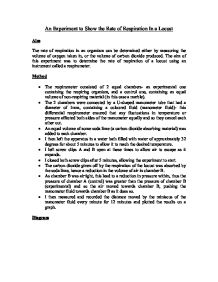 An Experiment to Show the Rate of Respiration In a Locust.

An Experiment to Show the Rate of Respiration In a Locust Aim The rate of respiration in an organism can be determined either by measuring the volume of oxygen taken in, or the volume of carbon dioxide produced. The aim of this experiment was to determine the rate of respiration of a locust using an instrument called a respirometer. Method * The respirometer consisted of 2 equal chambers- an experimental one containing the respiring organism, and a control one, containing an equal volume of non-respiring material (in this case a marble). * The 2 chambers were connected by a U-shaped manometer tube that had a diameter of 1mm, containing a coloured fluid (manometer fluid)- this differential respirometer ensured that any fluctuations in temperature or pressure affected both sides of the manometer equally and so they cancel each other out. * An equal volume of some soda lime (a carbon dioxide absorbing material) was added to each chamber. * I then left the apparatus in a water bath filled with water of approximately 32 degrees for about 5 minutes to allow it to reach the desired temperature. ...read more.

2 0.5 11 21 1 1 12 22 1 1 Discussion Respiration provides the necessary energy for carrying on all essential life processes. Respiration is divided into two distinct phases; external respiration and internal, or cellular respiration. External respiration includes all steps in the process of delivering oxygen to each cell in the body and disposing of carbon dioxide, a gas given off as a waste product when cells use up oxygen. In humans and other animals such as locusts, that have lungs (or equivalent of), breathing is an essential part of external respiration. Internal respiration occurs inside every living cell and involves a series of chemical reactions that liberate energy from food. Some of the energy is transformed into body heat while the rest is used to drive other chemical processes that keep the body working. During internal respiration in animals, food molecules are usually combined with oxygen and carbon dioxide is usually released. The rate of respiration in cells and tissues is directly related to the demand for energy. When cells are in a growth phase or involved in protein synthesis, for example, their rate of respiration is high. ...read more.

If they are placed in a warm environment then they become warm and so do their cells. This speeds up their metabolism (the chemical reactions taking place inside their body) including the rate at which they respire. Therefore the respiration rate increases because the locust's body requires more oxygen in order for its metabolism to speed up. Therefore an increase in the temperature would cause an increase in the rate of respiration of a locust. A lot of things could have been done to reduce anomalies in this experiment. One thing I could have done to make it more reliable was to weight the soda lime and use the same amount in each test tube -as they could have been different amounts. Another was making sure that the marble I used was the same volume as the locust (which would be very difficult to do in class). Another major anomaly could have been in assuming that the respiration of the locust would be normal after a certain period of time after it had acclimatized; being realistic this would not be the case, as realistically, the locust would have had a higher rate of respiration during the whole experiment, and therefore would not have acclimatized so quickly-or maybe not at all during the whole experiment. ...read more.

This is a relatively straight forward experiment and the method is clearly described and the data well displayed. However, a fundamental misunderstanding of what information the apparatus provides limits the quality of this work.