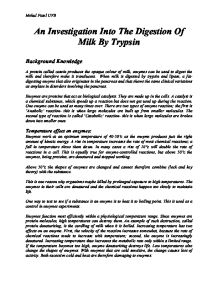 An Investigation Into The Digestion Of Milk By Trypsin.

An Investigation Into The Digestion Of Milk By Trypsin Background Knowledge A protein called casein produces the opaque colour of milk, enzymes can be used to digest the milk and therefore make it translucent. When milk is digested by trypsin and lipase, a fat-digesting enzyme that also originates in the pancreas and that shows the same clinical variations as amylase in disorders involving the pancreas. Enzymes are proteins that act as biological catalysts. They are made up in the cells. A catalyst is a chemical substance, which speeds up a reaction but does not get used up during the reaction. One enzyme can be used as many times over. There are two types of enzyme reaction; the first is 'Anabolic' reaction- this is when large molecules are built up from smaller molecules. The second type of reaction is called 'Catabolic' reaction- this is when large molecules are broken down into smaller ones. Temperature effect on enzymes: Enzymes work at an optimum temperature of 40-50?c as the enzyme produces just the right amount of kinetic energy. A rise in temperature increases the rate of most chemical reactions; a fall in temperature slows them down. In many cases a rise of 10?c will double the rate of reactions in a cell. This is equally true for enzyme-controlled reactions, but above 50?c the enzymes, being proteins, are denatured and stopped working. Above 50?c the shapes of enzymes are changed and cannot therefore combine (lock and key theory) with the substance. This is one reason why organisms maybe killed by prolonged exposure to high temperatures. The enzymes in their cells are denatured and the chemical reactions happen too slowly to maintain life. ...read more.

To record the results I had to do two things simultaneously, I had to decide whether the reaction had occurred as well as checking the time taken for the reaction, which was very difficult. The trypsin warmed in the water separately could have saved more time and the results would have been better, but the trypsin would also have to be left in the water bath as its temperature decreases rapidly. When the trypsin is at the correct temperature, it would have been advisable to warm up the milk at the same time. This would make sure that the two separate solutions are not mixed, therefore allowing us to time the experiment more accurately because otherwise if the solutions were mixed there would have been a human error with the experiment, because this allows time for the substrate and the catalyst to mix together, without actually timing the experiment, making the results imprecise. I could then have varied the concentration of trypsin, which would inevitably find out the optimum concentration for the fastest rate of reaction. I can predict that the greater the concentration, the faster the rate of reaction. I could of also have heated the test tubes separately, which I did not do for this particular experiment. If I had more time I could have done each temperature several more times and worked out an average, because the more results obtained the better the result would be and also the results would be more precise as well. Also I could have measured the milk and the trypsin more accurately, as sometimes I spilled the solution or I had to measure the solution quickly due to the restriction in time. I could alter the weight of the milk powder, and investigate how much powder is needed for the fastest rate of reaction. Mehul Patel UVB ...read more.