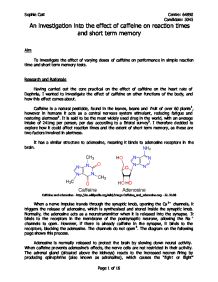 An Investigation into the effect of caffeine on reaction times

An investigation into the effect of caffeine on reaction times and short term memory Aim To investigate the effect of varying doses of caffeine on performance in simple reaction time and short term memory tests. Research and Rationale Having carried out the core practical on the effect of caffeine on the heart rate of Daphnia, I wanted to investigate the effect of caffeine on other functions of the body, and how this effect comes about. Caffeine is a natural pesticide, found in the leaves, beans and fruit of over 60 plants1, however in humans it acts as a central nervous system stimulant, reducing fatigue and restoring alertness2. It is said to be the most widely used drug in the world, with an average intake of 241mg per person, per day according to a Bristol survey3. I therefore decided to explore how it could affect reaction times and the extent of short term memory, as these are two factors involved in alertness. It has a similar structure to adenosine, meaning it binds to adenosine receptors in the brain. Caffeine and adenosine - http://en.wikipedia.org/wiki/Image:Caffeine_and_adenosine.svg - 22.10.08 When a nerve impulse travels through the synaptic knob, opening the Ca2+ channels, it triggers the release of adenosine, which is synthesised and stored inside the synaptic knob. Normally, the adenosine acts as a neurotransmitter when it is released into the synapse. It binds to the receptors in the membrane of the postsynaptic neurone, allowing the Na+ channels to open. However, if there is already caffeine in the synapse, it binds to the receptors, blocking the adenosine. The channels do not open4. The diagram on the following page shows this process. Adenosine is normally released to protect the brain by slowing down neural activity. When caffeine prevents adenosine's effects, the nerve cells are not restricted in their activity. The adrenal gland (situated above the kidneys) reacts to the increased neuron firing by producing epinephrine (also known as adrenaline), which causes the "fight or flight" symptoms: faster pulse rate, dilated pupils, raised blood pressure, higher blood sugar levels, tensed muscles etc5. ...read more.

After reviewing my method, I have decided to measure an additional dependent variable: the blood pressure of participants. This will hopefully give a more objective result, as the volunteers could improve at the games over the course of the two weeks, but they are very unlikely to be able to lower or increase their blood pressure significantly over this time period. The extra equipment I will need is a sphygmomanometer (blood pressure monitor). The type I will use is automatic, so all I need to do is put the cuff on the unclothed upper arm, with the cable pointing downwards, and press the button. The extra variables involved with taking blood pressure are as follows: Factor How I will prevent it How it would affect my results How the error would be visible in my results What kind of error Pre-existing condition In my medical questionnaire I have asked if the volunteers have any heart conditions The average would be brought up by someone with high blood pressure, regardless of the caffeine dose The graph would be higher Systematic Recent exercise I will let the volunteers sit for 10 minutes before I take their blood pressure If the volunteer has recently exercised, their blood pressure will be higher A smooth curve would not be formed Random Arm used I will always take the blood pressure in the non-writing arm The pressure will vary between arms, and I have chosen the non-writing arm in case it causes discomfort A smooth curve would not be formed Random Results After 3 days of doing my experiment, I reviewed my results. As I could still not see any clear pattern, I decided to also record the number of hours of sleep each volunteer had the night before the test. On the day of 250mg, CE felt unwell, so she was advised not to continue to 300mg. Hours of sleep Volunteer Amount of sleep the night before the test/hours 150mg 200mg 250mg 300mg AS 8 7 7.5 7.5 BB ...read more.

An outstanding example for the level I would expect for A level biology. The introduction and hypothesis are very good with a very high level of detail. The main body and conclusion are also completed to a very high level ...

The background and hypothesis and scientific reasoning behind the experiment are analysed and explained to a very high level. Choice of statistical test is adequate. Uses a selection method and tries to rule out anything that could be a confounding factor a level that I would expect of only the highest of A level candidates. Addresses any adverse affects caused by the caffeine very well indeed. Carry out a preliminary test to have a guideline and also to add on any other factors. Conclusion and overall analysis which include a range of statistical tests and graphs are all very good.

Grammar and punctuation good. Spelling mainly good apart from one or two words e.g. practise should be practice.