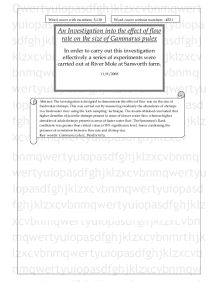 An Investigation into the effect of flow rate on the size of Gammarus pulex In order to carry out this investigation effectively a series of experiments were carried out at River Mole at Sanworth farm. 11/8/2008 Rationale Shrimps are invertebrates and invertebrates are integral to the functioning of ecosystem. Ecosystems depend on the organisms that compose them for healthy functioning. Ecosystems are important as they regulate many of the chemical and climatic systems that make clean air and water available and produce plentiful oxygen for the survival of humans and life on planet. It is therefore important for humans to maintain the health and vitality of organisms that compose this ecosystems.1 This research could be used to inform local management teams about the ways of maximising the populations of freshwater shrimps and to find out the habitat that is most suitable for them. The data collected can be used by the Surrey Biodiversity Action Plan (BAP) management team in Surrey. BAP was drawn up in retort to the UK biodiversity action plan in 1994. Its main purpose is to identify the actions needed to conserve the wildlife of Surrey. Different measures are taken in order to preserve the population, enhance and safeguard the biodiversity by BAP.2 My investigation is designed to investigate the size distribution of freshwater shrimp's population and how this varies with location. A small sample of the total population will be investigated and the data obtained from the sample study can be used to reflect the characteristics of the entire population. This information can be used by the BAP for the purpose of education, conservation and management practices. The data collected and abiotic factors such as temperature and dissolved oxygen concentration measured can be used by the BAP to construct interventions to modify, control and improve the habitat of freshwater shrimps. Research Biodiversity is the sum of all the different species of animals, plants, fungi and the variety of habitats in which they live.3It is known that between 1.4 and ...read more.

The shrimps will be replaced into the river after I have finished counting and recording. Method I will sample twenty different sections of the river randomly. This will give me a suitable amount of data to adequately perform statistical tests such as Spearman's rank coefficient. In each random section temperature, dissolved oxygen concentration an samples of freshwater shrimps will be taken. 1) Tape measure was placed along the river bank (7 meter across) and random numbers were generated using a calculator for 29 sites. 2) Freshwater was collected into the enamel tray for the shrimps. 3) Random number was found on the tape and 4 steps were taken into the river in order to carry out random sampling. 4) The point found by taking 4 steps using a random number is the point where a quadrate was placed vertically. 5) The D-net was placed next to the quadrat upright in the direction of the water flow. 6) The 'Kick' sampling technique was continued for 45 seconds. 7) The organisms collected were placed into the enamel tray. 8) The entangled organisms still stuck to the D-net were collected into the tray by pouring water through the net around. This allowed any excess organisms to be collected together with the rest of the organisms. 9) The pipette and spoon were used to collect and distinguish between adult and juvenile shrimps, as this was done, the number of adult and juvenile shrimps captured were counted. 10) The results were recorded in a form of a telly chart for the area indicated by a random number. 11) On the same spot the flow rate was measured by first setting up the hydro prop apparatus. 12) The complete hydro prop was placed into the river on the area indicated by the random number. The hydro prop was placed in the direction of the water flow with the propeller at the end that was away from the main body of the hydro prop. ...read more.