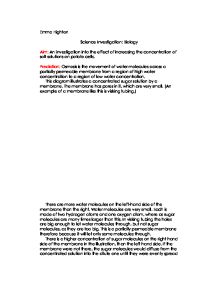 An investigation into the effect of increasing the concentration of salt solutions on potato cells.

Volume of water for control(cm ) Concentration of salt solution(0%, 5%...) Plan: This is what I intend to do. In a group of three, I will collect all of my apparatus and set them up in a clear space. Using an apple corer, I will cut six cylinders of potato, making sure all the cylinders come from the same potato to make it fair. Using a ruler and knife I will cut the cylinders to be 3cm long. After, I will collect 12 beakers, labelling two with each salt percentage 0% 5% 10% 15% 20% 25%. For example, two pots will say 0% salt, one of these pots will have a cylinder of potato in, and later on, the other will have solution in it. For the time being, I will put one of the six potato cylinders in each beaker. Then I will take the labelled pots over to the scales, and weigh and record each potato cell, corresponding with its percentage on the label, making sure I put back the potato in the same pot, and I record the weight next to the correct %. After doing this, using a measuring cylinder of 0 - 100 cm I will measure out carefully 20 cm of each solution, pouring it into the corresponding pot, the pot without the potato cell in it. One person will start the stopwatch as the other people in the group drop the correct potato into the matching beaker of solution all at the same time. This will now be left for ten minutes in the incubation period. After 10 minutes, each of the group members will remove the potato from the beakers, placing them down in front of the beaker they came from so that they do not get mixed up. Using the scales, they will each be re-weighed and this result will be recorded next to its original weight. ...read more.

When I was pouring out eh different solutions I was always eye level with the measuring cylinder to make the amount even more accurate. Another thing that we did to make sure it was a as possible was that when we were weighing the potato cells we used the same scales each time because another set of scales would not be exactly the same. There was a greater decrease in mass at one trial of salt concentration. This was in the experiment with 15% salt solution. The mass of the potato decreased dramatically and the higher concentrations after it did not loose as much weight. This was an odd result and is circled on the graph. This result could be because there was a different concentration in the potato cell than the others meaning that it could dilute the salt solution more. Another reason could be because the concentration of the solutions could have been mixed up, causing a greater need for the solution to be diluted meaning the more water lost from the potato. An improvement for my experiment could be that when the measuring cylinder was washed out we should have made sure that the water was shaken thoroughly out of it to prevent further dilution of a salt concentration. When the potatoes were being dropped into the beaker for the incubation period we had to drop them all in at once. This meant that more that one person was needed to drop them in meaning that each potato cell would not have been placed in at exactly the same time. This makes the experiment unfair. To improve on this if I were to do the experiment again, I would experiment with each concentration of salt solution and its potato cell one at a time. This would make it more accurate as it means that each incubation period could be timed accurately instead of trying to get all six samples in at once, although this is very time consuming. ...read more.