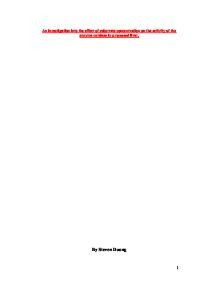 An investigation into the effect of substrate concentration on the activity of the enzyme catalase in processed liver.

An investigation into the effect of substrate concentration on the activity of the enzyme catalase in processed liver. By Steven Duong Background Catalase behaves as a catalyst for the conversion of hydrogen peroxide into water and oxygen. Catalase is an example of a particularly efficient enzyme. Catalase has one of the highest turnover numbers for all known enzymes (40,000,000 molecules/second). This high rate shows an importance for the enzymes capability for detoxifying hydrogen peroxide and preventing the formation of carbon dioxide bubbles in the blood. Advantages of hydrogen peroxide: Powerful - H2O2 is one of the most powerful oxidizers known -- stronger than chlorine, chlorine dioxide, and potassium permanganate. And through catalysis, H2O2 can be converted into hydroxyl radicals. Safe - Despite its power, H2O2 is a natural metabolite of many organisms, which decompose the H2O2 they produce into oxygen and water. H2O2 is also formed by the action of sunlight on water -- a natural purification system for our environment. Versatile - The fact that H2O2 is used for seemingly converse applications proves its versatility. For example, it can inhibit microbial and encourage microbial growth. Similarly, it can treat both easy-to-oxidize pollutants and difficult to oxidize pollutants. Selective - The reason why H2O2 can be used for such diverse applications is the different ways in which its power can be directed. By simply adjusting the conditions of the reaction (e.g., pH, temperature, dose, reaction time, and/or catalyst addition), H2O2 can often be made to oxidize one pollutant over another, or even to favour different oxidation products from the same pollutant. Widely Used - Since it was first commercialised in the 1800's, H2O2 production has now grown to over a billion pounds per year (as 100%). In addition to pollution control, H2O2 is used to bleach textiles and paper products, and to manufacture or process foods, minerals, petrochemicals, and consumer products (detergents). Enzymes such as Catalase are protein molecules, which are found in living cells. ...read more.

A reasonable volume of the substrate would be 10ml as it is roughly proportional to the amount of the enzyme catalase contained within the liver. Again, keeping the tests fair, 10ml of the hydrogen peroxide would be used each time. 1g of homogenised/processed liver would be used for each experiment, keeping the test fair; the processed liver contains the enzyme catalase, which helps to catalyse the substrate, in this case, the hydrogen peroxide would be catalysed. The reaction would also need to be timed; a reasonable time would be approximately 30 seconds; this allows sufficient time for the reaction to take place. Also, by timing each experiment for 30 seconds, you are ensuring fairness of conductivity. Method of conductivity: 1. Set up the apparatus as shown in the diagram; ensure that you fill the 250ml measuring cylinder before hand and place it in the container which should also be filled with water. Make sure that the tube on the Buchner flask is inserted directly in the container to the measuring cylinder. To help keep the cylinder in place, use a clamp stand to secure its position. 2. Using a spatula, extract exactly 1g of homogenised liver. To ensure that you extract 1g of the liver, weigh the spatula using the weighing scales. Then weigh the spatula together with the liver, if the weight has risen by a difference of 1g compared to the weight of the spatula alone, this ensures that you have extracted 1g of the liver. 3. Carefully place the liver extract inside the buchner flask. 4. Put the bung in place to ensure the flask is sealed. To seal the hole even further, you could use blue-tak for example, preventing oxygen from escaping during the reaction; this may have a negative effect on the results if the flask was not properly sealed. Because the reaction involves the enzyme catalase breaking down hydrogen peroxide into two products, water and oxygen, the oxygen will be collected at the measuring cylinder. ...read more.

* There could have been non-competitive inhibitors, which attach themselves to a part other than the active site and altering the shape of the enzyme and slowing down the rate of reaction. * It may have been due to the lack of monovalent cations, e.g. chlorine, as it needs this activator to fill a gap in the active site, so that the substrate fits perfectly. Improvements and further investigating To improve the investigation, you could try more accurate ways of conducting the experiment so the oxygen released is not lost and the reading is therefore more accurate. Ways of improving the investigation are as follows... * You could use a gas syringe for extra accuracy. * You could place the flask with the reactants in it (sealed with a bung) on a balance, and measure the weight loss. This would be very accurate as you could measure the loss on a balance very accurately and you need not worry about losing oxygen. * An oxygen probe could be used to detect oxygen levels and very precisely send the data to a computer. This would eliminate the chance of reading off the amount of oxygen on the measuring cylinder incorrectly. * Another possibility would be to use a burette, which is far more accurate than a measuring cylinder and hence it would give more precise readings and therefore the experiment would be more accurate. * You could investigate on the other variables, temperature and pH. * One final thing that you could do is to conduct the experiment all over again and to make an average of the two averages. This will insure great accuracy, but results obtained from the initial investigation have sufficient evidence to support a firm conclusion regardless of the fact that an anomalous result was obtained. * To extend this experiment even further, you could try the enzymes extracted from plants such as celery, as that contains catalase to break down hydrogen peroxide. ...read more.