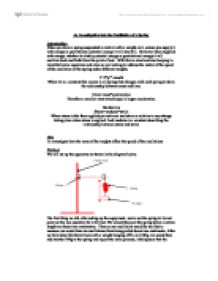 An Investigation into the Oscillation of a Spring.

An Investigation into the Oscillation of a Spring Introduction When you have a spring suspended in mid air with a weight on it, unless you supply it with energy or gravitational potential energy it will stay still. However when supplied with energy, whether its elastic potential energy or gravitational energy it will oscillate back and forth from the point of rest. With this in mind and also keeping in mind the below equations and rules we are looking to address the matter of the speed of the oscillation of the spring under different weights. T=2*pi* mass/k Where K is a constant that occurs in all springs but changes with each spring to show the relationship between mass and time. Force=mass*acceleration Therefore a smaller mass would equal a larger acceleration. Hookes law Stress=modulus*strain Where stress is the force applied per unit area and strain is relative to any change taking place when stress is applied. And modulus is a constant describing the relationship between stress and strain Aim To investigate how the mass of the weights affect the speed of the oscillations Method We will set up the apparatus as shown in the diagram below. ...read more.

It starts off, with extension being directly proportional to load until it reaches the elastic limit where the spring extends more than it would if extension was directly proportional to load. This is where the spring starts to stretch out of shape and will not go back to its original state. As my investigation is into the time a spring takes to 'bounce' 10 times I will use the information I have just given to explain my hypothesis for the experiment. My theory is that if a spring extends further then it will take longer to 'bounce'. I think that this is because when you add weight to the spring, you give it more potential energy. When you let it go it releases kinetic energy. It will travel further, the more potential energy it has. The spring then needs energy to revert back to its original shape. Because it needs energy it takes more time to get back to the original position. If you add more weight to the spring then it will need more energy to get back. ...read more.

m. The constants in this equation are: 10,20,?,?k. The only variables in the equation are T and ?m, as the time changes so does the mass but everything else stays the same. As m gets bigger so ?m/k gets bigger meaning 20??m/k gets bigger and so T increases according to the equation. I pointed out earlier that T ? m but not directly. Something else I managed to conclude was the constant of K, I managed to rearrange the equation to work out K. T=2*pi* mass/K 0.384^=2^*pi^*100/K 0.147456=4*pi^*100/K 0.147456*K=3947.6 K=2677.3 Evaluation I feel the experiment went very well, we had no anomalous results and we had no safety errors. However there were a few things we could have done that I feel could have pushed to a more accurate and fair experiment. We should have used electronic computer aided timers that would have stopped bang on the tenth oscillation, however we had to stop it by hand with a digital timer. We could also have used a different measuring device to measure the distance we pulled the weight down by to create a fairer test and thus eliminating bias. However my results agreed with my conclusion and helped me to prove my theory. ...read more.