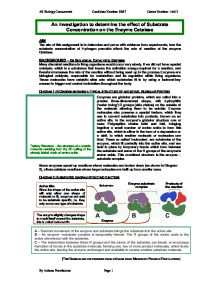 An Investigation to determine the effect of Substrate Concentration on the Enzyme Catalase AIM The aim of this assignment is to determine and prove with evidence from experiments, how the substrate concentration of Hydrogen peroxide affects the rate of reaction of the enzyme Catalase. BACKGROUND - ON BIOLOGICAL CATALYSTS, ENZYMES Many chemical reactions in living organisms would occur very slowly, if we did not have special catalysts, which is a substance that lowers the activation energy required for a reaction, and therefore increases the rate of the reaction without being used up in the process. Enzymes are biological catalysts, responsible for metabolism and its regulation within living organisms. These molecules have catalytic sites onto which substrates fit in by using a lock-and-key manner to trigger and control metabolism throughout the body. DIAGRAM 1 (A DIAGRAM SHOWING A TYPICAL STRUCTURE OF AN ENZYME, GLOBULAR PROTEIN) Enzymes are globular proteins, which are coiled into a precise three-dimensional shape, with hydrophilic ('water loving') R groups (side chains) on the outside of the molecule allowing them to be soluble. Enzyme molecules also possess a special feature, which they use to convert substrates into products, known as an active site. In the enzyme's globular structure one or more Polypeptide chains twist and fold, bringing together a small number of amino acids to form this active site, which is either in the form of a depression or a cleft, to which another molecule or molecules can bind. These so called 'molecules', are substrates of the enzyme, which fit perfectly into the active site, and are held in place by temporary bonds which form between the substrate and some of the R groups of the enzyme's amino acids. This combined structure is the enzyme -substrate complex. Some enzymes speed up reactions where molecules are broken down (as shown in Diagram 2), others catalyse reactions where large molecules are built up from smaller ones. ...read more.

After about 5cm3 air was displaced in the tub, the delivery tube was immediately shifted under the inverted burette, so that the oxygen being released from the reaction in the conical flask wasn't lost and so it could be collected and measured. 13. As soon as the delivery tube was placed under the inverted burette the stopclock was started and the reaction was measured over a period of 4 minutes, and at time intervals of 30 seconds, the volume of Oxygen collected in the inverted burette was recorded. The volume on the burette, which was recorded, was the level at which the oxygen had displaced the water initially present in the burette. 14. The value read from the burette, should be subtracted from 50cm3 (the initial water level in the burette, before Hydrogen Peroxide was added to the minced potato solution), to give the volume of oxygen released during the reaction. However, as mentioned in step 8, in cases where the initial water level was different and below 50cm3, then the volume of Oxygen recorded in the time intervals should be subtracted from the specific initial volume noted. 15. The whole procedure from step 1 to step 14 was repeated with the other Hydrogen Peroxide concentration solutions. It is important to be careful and make sure not to contaminate the different concentrations with one another, as it would cause inaccurate results. So every time a different Hydrogen peroxide solution was made, the syringe used to inject the substrate into the conical flask, was washed using distilled water. 16. The above experiment from step 1 to step 15 was repeated again at least once so that average values could be obtained. Repeating the experiment several times helps to produce better and more accurate results, as any inaccuracies in one experiment should be compensated for by the other experiments. 17. Finally, all the results were recorded. AS Biology Coursework Candidate Number: 8087 Centre Number: 14413 By Achana Premkumar Page 1 ...read more.