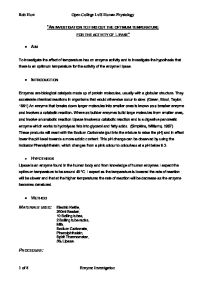 &quot;An investigation to find out the optimum temperature for the activity of Lipase&quot;.

"AN INVESTIGATION TO FIND OUT THE OPTIMUM TEMPERATURE FOR THE ACTIVITY OF LIPASE" * AIM To investigate the effect of temperature has on enzyme activity and to investigate the hypothesis that there is an optimum temperature for the activity of the enzyme lipase. * INTRODUCTION Enzymes are biological catalysts made up of protein molecules, usually with a globular structure. They accelerate chemical reactions in organisms that would otherwise occur to slow. (Green, Stout, Taylor, 1991) An enzyme that breaks down larger molecules into smaller ones is known as a breaker enzyme and involves a catabolic reaction. Where as builder enzymes build large molecules from smaller ones, and involve an anabolic reaction Lipase involves a catabolic reaction and is a digestive pancreatic enzyme which works to hydrolyses fats into glycerol and fatty acids. (Simpkins, Williams, 1987) These products will react with the Sodium Carbonate (put into the mixture to raise the pH) and in effect lower the pH level towards a more acidic content. This pH change can be observed by using the indicator Phenolphthalein, which changes from a pink colour to colourless at a pH below 8.3. * HYPOTHESIS Lipase is an enzyme found in the human body and from knowledge of human enzymes I expect the optimum temperature to be around 40�C. ...read more.

At the temperature of 60�C the ROR was only slightly higher than for 40�C. the increase in kinetic energy has increased the ROR but by only seeing a slight increase it suggests that denaturing has began to occur. As the Kinetic energy increases, as well as the molecules moving faster the lipase molecules vibrate more violently. At a certain point this vibrating becomes too great and the weak hydrogen bonds that hold the proteins into its specific protein structure begin to break. Each enzyme is specific and each work to catalyse one reaction. E.g. Lipase hydrolyses Lipids, or Amylase breaks down Starch. (Roberts, 1986) These breaks result in the lipase's structure shape changes, which changes the shape of the active site. With a different shaped active site the substrate will be not fit into it and will no longer be able to form complexes with it. This specificity is due to shape of their active site due to the precise protein structure each enzyme has. (Green, Stout, Taylor, 1991) How the active site makes each enzyme specific can be understood more clearly by looking at the Lock and Key hypothesis put forward to how enzymes react. ...read more.

The writer has written a basic but adequate investigation and has touched on all the relevant subheadings in varying detail. Covering introduction, methodology, hypothesis, discussion, conclusion and evaluation. This is an important part of A level practical investigations as it ...

The writer has written a basic but adequate investigation and has touched on all the relevant subheadings in varying detail. Covering introduction, methodology, hypothesis, discussion, conclusion and evaluation. This is an important part of A level practical investigations as it shows you are aware of the appropriate scientific approach when presenting your findings. The problem with this piece is that while areas such as evaluation and discussion are covered in apparent depth, the explanation of the method, aim and introduction could have linked in a few more areas of biology to demonstrate a breadth to their response, this is what impresses examiners. For example mentioning the genetic role of enzyme formation and the different types of bonds that can be present in a biological catalyst. In addition they did not find a reliable answer to their question therefore identification of anomalous results and omission of these from the final conclusion would have shown an awareness of what they had mentioned in their hypothesis i.e. the optimum is likely to be around 40 degrees. Examiners expect you to be aware of basic scientific knowledge and use it in conjunction with the findings of your investigation.

Certain aspects were analysed to a good depth such as an extensive explanation of where and why certain inaccuracies may have occurred and a suggestion of possible improvements. However I found the safety procedures to not be sufficient for an A level piece, a higher mark would be achieved by looking at a wider range of hazards and assessing their risk for this particular investigation, this is a key part of the science syllabus and shows foresight which is vital for keeping everyone safe. The discussion was repetitive at times which gains you no extra marks and simply wastes time, especially when mentioning how enzymes work, always give your work a read through to ensure it flows. Examiners would prefer to see a more in-depth methodology with better clarity so that reliability is demonstrated, for example ensuring you are making clear in how many test tubes you are putting each volume of substance etc. Repeating the investigation would have also enhanced the reliability and improved the mark, as this is ensuring an average can be obtained which is part of the A level science mark scheme.

Spelling and typing errors were consistent throughout and this affected the fluency of the piece, proof-reading is important as it ensures everything makes sense and is clear enough for an examiner to find what they are looking for. Quality of communication is always marked.