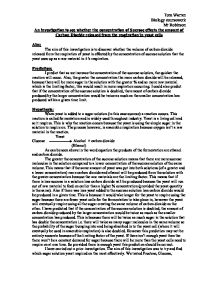 So it was a suitable procedure that was carried out. I think that the investigation was very reliable and that the results are gathered and interpreted were enough to base my conclusion upon. Maybe to improve the experiment we could put the five separate experiments into the same water bath ensuring that they are all at the same temperature. However in doing this I'm sure the results would be very similar if not exactly the same. As I said earlier I could extend the investigation by investigating the total mass loss when % concentration solutions above 20% are used; to see whether the overall mass loss increases, decreases, or stays the same when the concentration is above the optimum concentration. I would probably predict that the rate of respiration and amount of respiration occurring would be less than in the 15% sucrose solution because I have found out that as the concentration rises above the optimum concentration the rate of reproduction of the yeast cells decreases, so there will be less respiration occurring as there is less yeast cells. I could keep the same concentration and the same amount of yeast and the variable in this investigation could be the pH or the temperature. I would expect a pattern to emerge with the temperature as enzymes that would breakdown the sugar in the solution would denature and so respiration wouldn't be able to occur because glucose won't be present. The pH would also effect the results as different enzymes have different optimum pH's. Also different amounts of a catalyst could be added, however this would be very difficult. Other possibilities could include the variables being different concentration/quantities of yeast, or different types of sugar solutions at the same concentration. Tom Warren Biology coursework Mr Robinson ...read more.