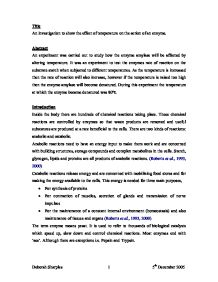 An investigation to show the effect of temperature on the action of an enzyme.

Title An investigation to show the effect of temperature on the action of an enzyme. Abstract An experiment was carried out to study how the enzyme amylase will be affected by altering temperature. It was an experiment to test the enzymes rate of reaction on the substrate starch when subjected to different temperatures. As the temperature is increased then the rate of reaction will also increase, however if the temperature is raised too high then the enzyme amylase will become denatured. During this experiment the temperature at which the enzyme became denatured was 80�c. Introduction Inside the body there are hundreds of chemical reactions taking place. These chemical reactions are controlled by enzymes so that waste products are removed and useful substances are produced at a rate beneficial to the cells. There are two kinds of reactions: anabolic and catabolic. Anabolic reactions need to have an energy input to make them work and are concerned with building structures, storage compounds and complex metabolites in the cells. Starch, glycogen, lipids and proteins are all products of anabolic reactions. (Roberts et al., 1993, 2000) Catabolic reactions release energy and are concerned with mobilizing food stores and for making the energy available to the cells. ...read more.

Fig 2-Induced Fit Hypothesis (www.2) Enzymes also need non-proteins to make them work. These are called cofactors. They maybe simple inorganic molecules such as iron, copper or magnesium or they may be complex organic molecules known as a coenzyme. The function of a coenzyme is to transfer chemical groups or atoms from the active site of an enzyme to an active site of another enzyme. There are certain substances which inhibit enzymes causing them to either slow down or to stop enzyme reactions altogether. These inhibitors can be split into different categories * Irreversible inhibitors- which combine with the enzyme molecule, which makes it impossible for the substrate molecule to react with it * Reversible inhibitors- which can become detached from the enzyme, if and when needed (Roberts et al., 1993, 2000) Activation energy is required by the enzyme to enable the reaction to begin and to speed up the reaction. A small amount of energy must be applied to the molecule to start the process of reaction. Enzymes work by lowering the amount of activation energy to make a reaction work. The use of enzymes in industry is very important and there are advantages in using enzymes, they are less likely to produce ...read more.

The results in the graph show that the enzyme worked best at 50�c. The reactions of an enzyme begin to decrease at temperatures of above 40�c because the enzyme is denaturing. When the enzyme is denatured, the enzyme action stops which is what has appeared to have happened. This experiment proved that enzymes either increase or decrease the rate of reaction because of the change in temperature. Enzymes have their own functional temperature and will not function as well or will denature if the temperature is too high. Appraisal The results support the conclusion and hypothesis although it would be helpful to repeat the experiment several times to prove these results. Although it would seem to be an easy experiment to carry out, it turned out to be quite confusing as there were too many samples going on at the same time. It was difficult to be sure that you were timing each sample correctly. The temperature of the water baths need to be maintained as during this experiment they were not always constant due to variables within the laboratory eg doors/ windows being opened and closed and other students adding or removing test tubes to the water baths. The slight drop in temperature may have made a difference to the final results of the reaction rate within the enzyme solution. ...read more.