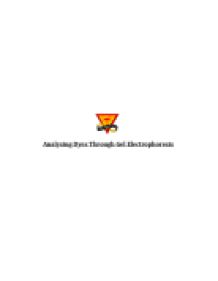 ﻿Analysing Dyes Through Gel Electrophoresis Abstract Early in the 19th century, scientists worked with the basic principles of electrophoresis. Scientists measured the behaviour and properties of small ions moving through solutions in an electric field. In the 1930?s, Arne Tiselius developed the ?Tiselius apparatus? for separating protein molecules through electrophoresis. By the 1960?s, many different gel electrophoresis methods made it possible to separate different molecules, driving the rise to molecular biology. Gel electrophoresis is the process by which molecules can be separated by size and electric charge through the application of an electric current. The strength of the current moves molecules through the pores of a thin layer of the gel, a firm jelly-like substance. The gel can be made so that its pores are only the right dimensions for separating molecules with a specific range of sizes and shapes. Smaller fragments usually travel farther than larger ones. In this experiment, a gel was used to separate the six tracking dyes; Bromophenol Blue, Crystal Violet, Orange G, Malachite Green, Xylene Cyanol and Dye Mixture. The gel that was used to separate the tracking dyes was agarose gel. In the first part of the lab, the agarose gel was poured into the tray while a gel comb was inserted in the center and was rested for twenty minutes until the gel partially solidified. ...read more.

Procedure A) Casting an Agarose gel 1. The dams were snapped onto each end of the casting tray. 1. The 8-well side of the gel comb was placed into the centre slots of the tray. 1. The agarose was heated up on a hot plate in a 500mL beaker filled with water. 1. 25mL of the melted agarose gel was poured into a graduated cylinder. 1. The agarose in the graduated cylinder was emptied into the gel-casting tray until it attained a depth of approximately of 3 mm. 1. The gel was allowed to solidify for 20 minutes while the gel tray or comb were not disrupted. 1. After 20 minutes, the comb and end dams were carefully removed. B) Loading and Running 1. 10 µl from each of the listed substances were placed into their respective wells using a micropipette. Lane 1: Bromophenol Blue Lane 2: Crystal Violet Lane 3: Orange G Lane 4: Malachite Green Lane 5: Xylene Cyanol Lane 6: Dye Mixture 1. The loaded gels were placed in the centre of the chamber. 1. Approximately 200mL of 1XTBE running buffer was added to the solution slowly until the level was just above the gel. The buffer was carefully poured into the side of the chamber ensuring that the buffer was not poured directly over the gel. 1. The cover was placed in the electrophoresis chamber. 1. ...read more.

If there was too little of a dye loaded into the well, that dye would be able to easily able to travel through the gel compared to a fully loaded well. The smaller volume of the dye would create a result where a dye is shown to have a smaller molecular size than it actually does. If the intensity of the polarity of one gel is stronger than another?s, the dye will travel farther. These factors would make a dye that has the strongest polarity seem like it has a smaller molecular size, causing it to migrate farther. Another source of error in this lab was the use of 2% concentration of agarose. The 2% agarose created pores too small for the dyes, the lower the concentration, the easier it is for molecules to travel through. The concentration was too high because the dye samples did not go far, they were clumped up together. A lower concentration of agarose is desired for larger molecules because it would result in a greater separation between bands that are close in size. If there was more separation in the bands, the different dyes in the dye mixture could be easily recognized, and the dye that traveled the farthest and had the smallest molecular size could be better identified. The concentrations of agarose in the gel can range from 0.5% to 2%, but 1% is best for most experiments (Douches, 2009). ...read more.