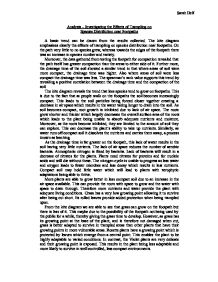 Analysis &quot; Investigating the Effects of Trampling on

Analysis - Investigating the Effects of Trampling on Species Distribution near Footpaths A basic trend can be drawn from the results collected. The kite diagram emphasises clearly the effects of trampling on species distribution near footpaths. On the path very little to no species grew, whereas towards the edges of the footpath there was an increase in species number and variety. Moreover, the data gathered from testing the footpath for compaction revealed that the path itself has greater compaction than the areas to either side of it. Further more, the drainage time of the soil showed a similar trend in that where areas of soil were more compact, the drainage time was higher. Also where areas of soil were less compact the drainage time was less. The spearman's rank value supports this trend by revealing a positive correlation between the drainage time and the compaction of the soil. The kite diagram reveals the trend that less species tend to grow on footpaths. This is due to the fact that as people walk on the footpaths the soil becomes increasingly compact. ...read more.

Therefore more nutrients and water provide the plant with adequate living conditions. Grass has a very low growing point allowing it to survive after being cut short. Its rolled leaves provide added protection when being trampled upon. From the kite diagram we are able to see that grass can grow on the footpath but there is less of it. This maybe due to the possibility of the footpath not being used by the public for a while, thereby giving the grass time to develop. However, as grass has its growing point at the base of the plant, and is therefore not damaged when cut, grass is better adapted to survive in trampled areas than other plants that have their growing points in more vulnerable areas. Rosette plants have a growing point which is protected by leaves which emerge from a central point. This enables the plant to be highly adaptable to varied conditions. In contrast, the Violet plants are very delicate and their growing point is exposed. ...read more.

The soil is proven to be generally more compact on the footpaths than in the surrounding areas. This compact soil on footpaths leads to increases drainage time as the soil has less pores or air space which would normally aid water absorption. The growth point of a plant can also be a factor as to why trampling on species on footpaths affects their distribution. A trend was shown from the data collected that grass, a very adaptable and sturdy plant, was able to grow on footpaths and withstand the trampling. This is due to grass having a growing point at the base of the plant where it is protected well. In contrast, the Violet plants were recorded to only grow in the surrounding areas of the footpaths. This is due to the growing point being highly exposed. The spearman's rank value shows a positive correlation between drainage time and the compaction of the soil. As the spearman's rank value is greater than the critical value, 0.414>0.377, it can be valued as reliable. Moreover, the confidence level of the spearman's rank calculation is 95% which can be valued as very reliable. ...read more.