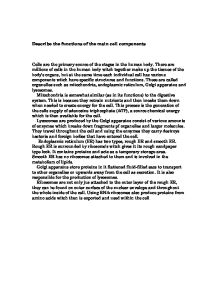 Anatomy and physiology - cells, tissues and systems of the body. Describe the functions of the main cell components

Describe the functions of the main cell components Cells are the primary source of the stages in the human body. There are millions of cells in the human body witch together make up the tissues of the body's organs, but at the same time each individual cell has various components witch have specific structures and functions. These are called organelles such as mitochondria, endoplasmic reticulum, Golgi apparatus and lysosomes. Mitochondria is somewhat similar (as in its functions) to the digestive system. This is because they retrain nutrients and then breaks them down when needed to create energy for the cell. This process is the generation of the cells supply of adenosine triphosphate (ATP), a source chemical energy which is then available for the cell. Lysosomes are produced by the Golgi apparatus consist of various amounts of enzymes which breaks down fragments pf organelles and larger molecules. They travel throughout the cell and using the enzymes they carry destroys bacteria and foreign bodies that have entered the cell. Endoplasmic reticulum (ER) has two types, rough ER and smooth ER. Rough ER is surrounded by ribosome's witch gives it its rough sandpaper type look. It contains proteins and acts as a temporary storage area. ...read more.

All three layers give the stomach a strong structure and are responsible for the churning motion of the food and releases secretions from the gastric glands. Nerve tissue consists of cells called neurons which transmit nervous impulses around the body. In the skins dermis consists of sensory receptors that contain nerve endings which are sensitive to touch, pressure, temperature or pain. This helps the body to be aware and cope with the environmental changes as it sends nervous impulses to the brain. Some parts of the skin have more of these sensory receptors such as the lips and finger tips causing them to be more sensitive. Gross structures of the body The Cardio Vascular System The cardio vascular system has several functions:- To transport a supply of oxygen to the body, continuous blood supply and nutrient to the cells. To export waste gasses of carbon dioxide. The focal point of the cardio vascular system is the heart witch pumps the blood into two separate systems of blood vessels, the pulmonary circulation and the systemic circulation. These are separated by the septum. The pulmonary circulation witch is on the right side and carries deoxinated blood, is the purpose of the transport of carbon dioxide from the blood to the lungs and then exhaled out. ...read more.

The spleen is the largest lymphoid organs which store a back up supply of red and whit blood cells. The thymus gland is found in the upper part of the chest and reaches its maximum size at puberty and the wastes away. Tonsils are four of the lymphoid organs, pharyngeal tonsil, lingual tonsil, and two palatine tonsils. Musculo-Skeletal System Bones Provides structure to the framework of the body Gives movement to the body at joints powered by muscle attached to the Protects vita organs in the body Contains re blood cells in the red bon marrow Contain minerals such as calcium and phosphate which are essential for blood calcium levels Skeletal Muscle function Attached to connective tissue Creates movement with contractions Contain elastic tissue The muscular skeletal system is muscles and bones working together to create movement of the skeleton. The muscle is attached to the bone by tendons using series connective tissues which contain protein fibres that can b tough or even elastic (flexible). Ligaments holds together the bones of joints. Immune system The immune system helps protect the human body from harmful micro-organisms and rejects foreign materials. Immunity has two categories non- specific mechanisms which prevent entry and specific mechanisms which includes long term immunity against certain infection. White blood cells involved in immunity are called lymphocytes granulocytes and monocytes, witch fight against disease and infection. ...read more.