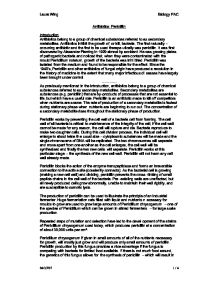 induce Penicillium chrysogenum to make lots of penicillin by limiting the amount of food available within the fermenter where the mould is growing. The genes inside the fungal cells don't know that there are not any bacteria out there and are only responding to the decreased availability of food. A supply of oxygen is required, as the growth of the fungus and the production of penicillin require aerobic conditions. The production of penicillin is stimulated by the addition of phenylacetic acid, but the concentration is critical as it is toxic to the fungus. Once the penicillin is released from the fungal cells, the compound is isolated from the fermenter's contents and purified by special biochemical processes. The process of extraction, purification and subsequent chemical modification of penicillin is referred to as downstream processing. The penicillin is extracted firstly by filtration, which separates fungal material from the medium, then by using solvent extraction to isolate the penicillin. The pH is reduced to between 2.0 and 2.5 and penicillin is extracted into an organic solvent such as amyl acetate. Penicillin is then re-extracted back into the aqueous buffer of pH 7.5, concentrated and then crystallised. Penicillin produced in this way is known as penicillin G, which may be converted into semi-synthetic penicillin's as means of overcoming the problems of penicillin-resistant strains of bacteria (see Antibiotic Resistance section). ...read more.

Bacteria most easily acquire resistance to a given antibiotic when bacteria are in a limited geographic environment with routine, consistent exposure to antibiotics or within a single individual on long-term antibiotic therapy. If antibiotics are used extensively, there is an increased likelihood of selection of a bacterial cell that is resistant to the effects of a given antibiotic. Another situation that encourages selection for antibiotic resistance is indiscriminate usage of antibiotics. If an antibiotic is not needed to treat a disease, such as a disease caused by a virus (antibiotics only work on bacteria), the use of antibiotics in this situation increases the opportunity to select a bacterial strain that is resistant to that antibiotic. There is increasing awareness of what we are doing to increase the presence of antibiotic-resistant strains of disease-causing bacteria - both in the medical community and in the food industry. The issue of antibiotic-resistant bacteria is a world-wide problem and continuous efforts are being made to reduce this threat to human health. If action is not taken soon to find ways of combating this problem we may find that in years to come people will die of diseases that we are successfully treating today. Laura Wing Biology PAC 04/27/07 1 / 4 ...read more.