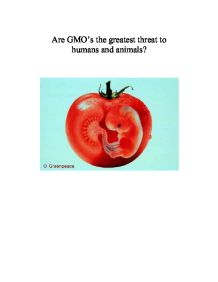 Are GMO's a threat CASE STUDY

Are GMO's the greatest threat to humans and animals? Contents Page [1] Introduction 3 [2] Scientific Knowledge 3 [2.1] What are GMO's 3 [2.2] How are GMO's Used 3 [2.3] The Process Involved 3 [3] Evidence [3.1] For and Against Arguments/Views 4 [3.1.1] Potential Benefits 5 [3.1.2] Potential Negative Effects 6 [3.2] Golden Rice Discussion 7 [3.3] Reliability 8 [4] Conclusion 8 [5] Suggestions/Recommendations 8 [6] Bibliography 9 Chapter 1: Introduction This case study is about if GMO's are the greatest threat to humans and animals it gives clear explanations and illustrations detailing what GMO's are all about. Firstly it explains the uses and process involved with GMO's. Secondly, it outlines whether GMO's pose a threat to animals and humans. Finally, the concluding remarks with my opinions would be forwarded, giving some possible suggestions or recommendations. Chapter 2: Scientific Knowledge [2.1] What are GMO's GMO's are Genetically Modified Organisms allow genes to be manipulated, altered and transferred from organism to organism (even to transform DNA itself). Of course, this requires a lot of skill and precision. This is often for animal and plant products that are either short of supply or very expensive. To gain a quick and cheaper method of these products is by inserting the genes controlling production of the required material into microbe cells and then the newly inserted genes tell the microbe to produce something that they would NOT naturally do. ...read more.

For example, the waste from sugar cane or sorghum can provide energy, especially in rural areas. It may be possible to breed plants specifically for this purpose. And other unexpected, useful products could prove of huge value. Benefits For Human Health: * Investigation of diseases with genetic fingerprinting - The Fingerprinting of animal and plant diseases is already possible. This technique allows researchers to know exactly what an organism is by looking at its genetic blueprint. * Vaccines and medicines - Plants are being engineered to produce vaccines, proteins and other pharmaceutical products. This process is called 'pharming'. (http://www.fao.org/english/newsroom/focus/2003/gmo7.htm) . [3.1.2] Potential Negative effects Negative Effects On The Environment: * Genes can end up in unexpected places - Through 'gene escape' they can pass on to other members of the same species and perhaps other species. Genes introduced in GMOs are no exception, and interactions might occur at gene, cell, plant and ecosystem level. Problems could result if, for example, herbicide-resistance genes got into weeds. So far, research on this is inconclusive, with scientists divided - often bitterly. But there is scientific consensus that once widely released, recalling transgenes or foreign DNA sequences, whose safety is still subject to scientific debate, will not be feasible. ...read more.

But in contrast to this, after considering both the positive and negative aspects of GMO's I have left myself feeling uneasy and curious of the long-term flaws and health risks associated with the negative effects that are describe in the case study, even though the positive side of GMO's are very pleasing and can come to a great use to all people of the world somehow the downsides overpower my thoughts through fear of changes for the worse of things i.e. "The transfer of anti-biotic resistance" can be life threatening I passed on to the wrong organisms . Overall I consider both sides of the case but I think they must be studied more until they reach a point of stability where there are no risk factors involved. Chapter 5: Suggestions/Recommendations [5] Suggestions/Recommendations If GMO's are stabilized to the extent that they will not affect any other plant/animal, I would suggest that GMO's should be used to bring round a world revolution ending poverty, illness and starvation (especially in badly affected areas of the world) because they can be easily donated to third world/developing countries through charities offering to send GMO plants/animals to those affected parts of the world giving them a better chance of living on nutritious food rather than the natural, non-GM foods. ...read more.