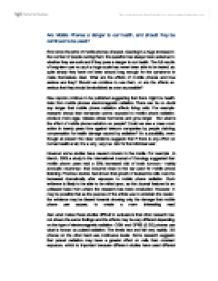 Are Mobile Phones a danger to our health, and should they be continued to be used?

Are Mobile Phones a danger to our health, and should they be continued to be used?

Ever since the price of mobile phones dropped, resulting in a huge increase in the number of people owning them, the question has always been asked as to whether they are safe and if they pose a danger to our health. The full results of long-term use on such a huge scale has never been able to be tested, as quite simply they have not been around long enough for the symptoms to make themselves clear. What are the effects of mobile phones and how serious are they? Should we continue to use them, or are the effects so serious that they should be abolished as soon as possible?

New reports continue to be published suggesting that there might be health risks from mobile phones electromagnetic radiation. There can be no doubt any longer that mobile phone radiation affects living cells. For example research shows that nematode worms exposed to mobile phone radiation produce more eggs, release stress hormones and grow larger.  But what is the effect of mobile phone radiation on people? Could we see a mass court action in twenty years time against telecom companies by people claiming compensation for health damage caused by radiation?

International guidelines are in place to limit public exposure to radio waves from base stations and mobile phones. These guidelines ensure that Radio Frequency emissions stay below a certain level, preventing excessive heating. Set by the International Commission on Non-Ionising Radiation Protection (ICNIRP), they have been adopted by the UK Government and the country's five mobile phone operators. ICNIRP is an international independent scientific organisation that provides guidance and advice on the health hazards of non-ionising radiation. Short exposure to mobile phone radiation - two hours - has been reported in 2003 to destroy cells in parts of the brain important for memory, movement and learning, and could possibly cause premature onset of illnesses such as Alzheimer’s.

Lund University Hospital Professor Leif Salford says mobile radiation allows harmful proteins and toxins through the brain barrier in rats. He also has found significant degree of damage to brain neurons in adolescent rats. He said: "If this effect was to transfer to young mobile users, the effects could be terrifying. We can see reduced brain reserve capacity, meaning those who might normally have got Alzheimer's or dementia in old age could get it much earlier." He used rats aged 12-26 weeks because their brain cells were still developing in a similar way to teenagers and younger children.

As a result of my conclusion, further questions arose. I realised from thinking literally and realistically, that people who have a contract for their mobile phone may feel the pressure of the economics of the situation. In real terms, this may mean that people who pay for a certain number of minutes of calls per month, and want to get value for money, will use their phone to the limit of the minutes available to them. This may mean that they subject themselves to the extreme radiation that Professor Leif Salford talked of regarding the effects it has on rats. However research on humans is extremely limited at this stage. Furthermore, I realise that within the next generation, when far more detailed research has been conducted with the benefit of hindsight, awful results may be found. It may be that all of my generation have been subjected to radiation with results no one anticipated. However, it is only possible to draw conclusions from the evidence available at present.

In all, the conclusions that are available to this wide forum are as indecisive as they are conclusive. My research has led me to ask as many questions as I have been able to answer.