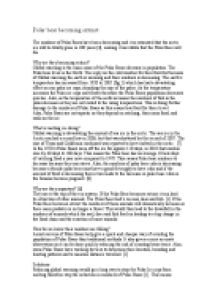 ﻿Polar bear becoming extinct The numbers of Polar Bears have been decreasing and it is estimated that the arctic ice will be totally gone in 100 years [4], making it inevitable that the Polar Bear will die. Why are they becoming extinct? Global warming is the main cause of the Polar Bears decrease in population. The Polar bear lives in the North. The reply on the cold weather for their food but because of Global warming the earth is warming and their numbers is decreasing. The earth?s temperature has increased from 1920 to 2005 [fig 1] which has had a devastating effect on our polar ice caps, shrinking the size of the poles. As the temperature increases the Polar ice caps melt faster therefore the Polar Bears population decreases quicker. Also, as the temperature of the earth increases the numbers of fish in the poles decrease as they are not suited to the rising temperatures. ...read more.

This would then lead to the downfall in the numbers of animals which the seal, deer and fish feed on leading to a big change in the food chain and the exaction of more animals How do we know their numbers are falling? Aerial surveys of Polar Bears help give a quick and cheaper way of counting the population of Polar Bears than traditional methods. It also gives a more accurate observation as it can be done quickly reducing the risk of counting bears twice. Also, some Polar Bears have tracking devices to determine their location, breading and hunting patterns and to measure distance travelled. [2] Solutions Reducing global warming would go a long way to stop the Polar Ice caps from melting therefore stop the reduction in numbers of Polar Bears [1]. This means burning less fossil fuels; oil, coal and gas therefore producing less carbon dioxide. We can use solar power, wind power, hydroelectric power and other alternative cleaner sources of power instead of fossil fuels which will not contribute to global warming. ...read more.

it contains a lot of polar bear data and information. [3] http://www.bcb.uwc.ac.za/envfacts/facts/deforestation.htm [4] http://hassam.hubpages.com/hub/Threat-To-Polar-Animals-Due-To-Global-Warming [5] http://www.wisegeek.com/why-should-we-save-polar-bears.htm [6] http://wwf.panda.org/what_we_do/where_we_work/arctic/area/species/polarbear/ [7] http://www.articlesbase.com/environment-articles/will-polar-bears-survive-the-threat-of-melting-ice-584721.html Evaluation: I think this a reliable source as it contains a lot of data and research. The amount of data they supply shows they are reliable and the data is valid. [8] http://www.nwf.org/Global-Warming/Effects-on-Wildlife-and-Habitat/Polar-Bears.aspx Evaluation: The purpose of this website is to inform and educate about Polar Bears so people know the effect global warming is having. It is a well known website and charity for animals. It conducts research about many different animals by experts. This makes them a reliable and valid source. [fig 1] Earths temperature change from 1845 to 2005 [fig 2] the amount of sea-ice over 30 years. All finding follow the same negative correlation. Reliable as all findings are similar. [fig 3] shows monthly decrease in polar ice. I think it is reliable as it is from the national sea and ice data centre, its purpose it to record sea and ice data and the website specialises in ice data so it should be reliable. ...read more.