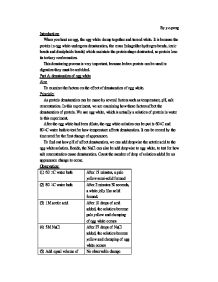 As protein denaturation can be cause by several factors such as temperature, pH, salt concentration. In this experiment, we are examining how these factors affect the denaturation of protein.

By y.c.pong Introduction: When you heat an egg, the egg white clump together and turned white. It is because the protein in egg white undergoes denaturation, the cross linkage(the hydrogen bonds, ionic bonds and disulphride bonds) which maintain the protein shape destructed, so protein lose its tertiary conformation. This denaturing process is very important, because before protein can be used in digestion they must be unfolded. Part A: denaturation of egg white Aim: To examine the factors on the effect of denaturation of egg white. Principle: As protein denaturation can be cause by several factors such as temperature, pH, salt concentration. In this experiment, we are examining how these factors affect the denaturation of protein. We use egg white, which is actually a solution of protein in water in this experiment. After the egg white had been dilute, the egg white solution can be put in 60�C and 80�C water bath to test for how temperature affects denaturation. It can be record by the time need for the first change of appearance. To find out how pH of affect denaturation, we can add dropwise the actetic acid to the egg white solution. Beside, the NaCl can also be add dropwise to egg white, to test for how salt concentration cause denaturation. Count the number of drop of solution added for an appearance change to occur. ...read more.

Discussion: The egg custard is at liquid phase before baking, and it turn to solid phase after baking. It shows that phase transitions of liquid to solid had occur in the denaturation process of egg and milk as affect by high temperature. The egg custard has a smooth and spongy texture. In the experiment, our egg custard is made of egg, milk, sugar only. Through applying of heat and manipulation, custards can become a viscous and semi-rigid gel, denaturation of the egg protein, causes a clumping of proteins, is primarily contribute for the thickening of the custard. Milk, although not as important as egg, but calcium ions present in the milk are also needed in order to form thicker custard. Sugar is also important to the viscosity and gel strength of custards. Sugar tends to increase the denaturation temperature of the egg proteins resulting in less stiff custard. The concentration of egg protein is proportional to the viscosity or gel strength of the custard. With increasing concentration, a custard sauce becomes more viscous and the gel strength of a baked custard firmer. A custard heated slowly begins to thicken at a lower temperature, thickens gradually over a wider temperature range and result in a smoother texture. Slow cooking can be achieved by placing the custard mixture in a water bath to warm to certain temperature before put into the oven which has been skipped in our experiment Part C: denaturation of milk Aim: To examine the factors on the effect of denaturation of milk. ...read more.

Yoghurt can be available for tasting after 1-2 days. Results: All milk turned into yoghurt, the sample is no longer liquid but is in semi-solid. The yoghurt is a bit sour than the original sample. Discussion: Yoghurt is made by fresh milk, but often some specific bacteria strains are introduce into the milk. The bacteria ingest natural milk sugars and released lactic acid as a waste product. The acid decrease the pH and cause the denaturation of milk protein during which the cross linkage between protein break and protein uncoiled. Then, the protein will tangle into a solid mass, yoghurt formed In our experiment, we mixed the 50 ml milk with 5 ml yoghurt to made the sample yoghurt instead of milk only .the 5 ml yoghurt is to provide the bacteria. Only a small amount of live yoghurt can is needed to inoculate a new batch of yoghurt because the bacteria can reproduce and multiple themselves during the yoghurt making process. Besides the incubator's temperature is 38 �C because it is the optimum temperature of bacteria to reproduce. The yoghurt newly made is more sour than the original sample. It may be due to the long incubation hours, as we had kept it over 48 hours. The bacteria ingest a higher % of milk sugar and release more lactic acid. To stop the incubation we can place the yoghurt in a refrigerator. ?? ?? ?? ?? ...read more.

Response to the question is distinctly average. The candidate does not set up or present the data clearly and does not analyse the results to a very high standard. In addition, all of the scientific words used are quite basic, ...

Response to the question is distinctly average. The candidate does not set up or present the data clearly and does not analyse the results to a very high standard. In addition, all of the scientific words used are quite basic, showing only a base understanding of the different factors involved.

Results presented in a clumsy and rather basic manner, however the scientific information behind the experiment is explained accurately but again to a rather basic level. Only investigates three different temperatures which is not enough variation to draw adequate conclusions and does not use a control of any sort. Also only investigates one molarity of salt concentration and one change of PH which is again not adequate to draw any conclusions on the affect of PH as different amino acids may change or denature in reaction to a wide range of different PHs. Tries too many different types of egg and directly goes away from the main point of investigation. Provides no conclusion or analysis of results or scientific explanation.

Grammar clumsy and the wrong words or phrasing used in places. Spelling wrong in places. Could be prevented by simple proof reading. Punctuation is again okay but used wrongly in some places.