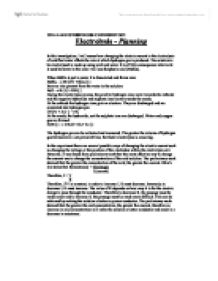 Assess how changing the electric current in the electrolysis of acidified water affects the rate at which hydrogen gas is produced.

WILLLIAM WEBSTER 5SK CHEMISTRY SC1 Electrolysis - Planning In this investigation, I will assess how changing the electric current in the electrolysis of acidified water affects the rate at which hydrogen gas is produced. The solution to be electrolysed is made up using acid and water. It is of little consequence what acid is used however in this case I will use Sulphuric acid (H2SO4). When H2SO4 is put in water it is dissociated and forms ions: H2SO4 � 2H (2+) + SO4 (2-) Ions are also present from the water in the solution: H2O � H (+) + OH (-) During the electrolysis process, the positive hydrogen ions move towards the cathode and the negative hydroxide and sulphate ions move towards the anode. At the cathode the hydrogen ions gain an electron. They are discharged and are converted into hydrogen gas: 2H (+) + 2e (-) � H2 At the anode, the hydroxide, not the sulphate ions are discharged. Water and oxygen gas are formed: 4OH (-) � 2 H2O + O2 + 4e (-) The hydrogen gas can be collected and measured. The greater the volume of hydrogen gas formed over a set period of time, the faster electrolysis is occurring. In the experiment there are several possible ways of changing the electric current such as changing the voltage or the position of the electrodes within the electrolysis cell. However, it was found from preliminary work that the most effective way to change the current was to change the concentration of the acid solution. The preliminary work showed that the greater the concentration of the acid, the greater the current. ...read more.

This could be avoided by using some form of automated circuit which only allowed the current to flow for a set period of time. Another factor which can account for anomalies it the fact that the quantities which have to be measured (the current and the volume of H2 gas produced) are very small. The ammeter could only be read accurately to the nearest 0.01 amps and the measuring cylinder used to collect the H2 gas could only be read accurately to the nearest 0.1 cm�. There are several ways in which this could be avoided if the experiment was repeated. One such way would be to use an ammeter and measuring cylinder with a smaller scale. Another would be to start off using a much greater current which would produce more hydrogen gas which could be more easily measured. Another way would be to allow the experiment to run for longer (i.e. time > 2mins) so that a larger and more easily measurable volume of hydrogen gas would be produced. Further experiments could be carried out to assess what other factors affect the rate of hydrogen production during the electrolysis of acidified water. One such factor, which could be investigated, could be the effect of temperature of the rate of hydrogen production. It has been shown in this experiment that the rate of hydrogen production is affected by how energetic the reaction is. Increasing the temperature that the electrolysis process occurs at would, in theory, make the reaction more energetic and increase the rate of hydrogen production. For this experiment, current would become a constant and temperature the variable. ...read more.