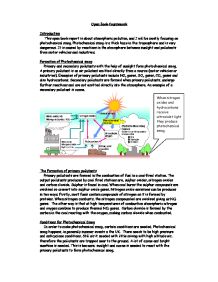 When multiplied together is gives us the energy and it shows photochemical reactions. Nevertheless, when this is formed the ozone reacts with the NO to reform NO2: O3 + NO O2 + NO2 When more NO2 is available, it will produce more oxygen atoms; consequently more ozone will be produced. When the air becomes polluted with high concentrations of hydrocarbons, as well as oxides of nitrogen, hydrocarbons are broken down in the troposphere to form carbon dioxide and water. This is done by the attack of a hydroxyl radical (OH). The peroxy radical (RCH2O2) reacts with NO to from NO2. RCH2O2 + NO RCH2 + NO2 This shows that it converts NO back into NO. The conversion of NO2 to NO reaction is the cause for oxygen atoms used to make ozone. The breakdown of hydrocarbons provides means of regenerating NO2 from NO and as a result the concentration of troposphere ozone rises. Minimising Sulphur Dioxide and Nitrogen oxide emissions The BPEO's of Longannet have chosen ways of reducing both sulphur dioxide emissions and nitrogen oxide emissions. ...read more.

* No solid wastes. * No products to be marketed. * It's clean. * Low cost power. * Causes minimum spoilage to the environment. Research on Photochemical Smog Current research is taking place by chemists to explain the chemistry involved in photochemical smog. One step is monitoring of troposphere pollutants. This involves, knowing the pollutants present in the troposphere and their concentrations. There are now several monitoring stations across the country recording pollutant concentrations. Secondly, studying individual reactions in the laboratory. This is that chemists have to perform experiments on pollutants to know what reactions take place and how quickly they occur. These studies help chemists to predict the rate at which the reaction will proceed in any set of conditions. Furthermore, modelling studies is another research of today. This includes computer stimulations studies to reproduce and predict the behaviour of pollutants in a photochemical episode. Therefore, chemists can predicts pollutants behaviours. Finally, smog chamber simulations. This is a laboratory experiment of a large scale. Primary pollutants are mixed in a chamber and are exposed to sunlight under controlled conditions. Probes monitor the concentrations of various species as the photochemical smog builds up. ...read more.

The candidate has given a very detailed response and it is clear that they understand what they are discussing. They have also included information on current scientific research which is not only interesting to read but shows dedication and that ...

The candidate has given a very detailed response and it is clear that they understand what they are discussing. They have also included information on current scientific research which is not only interesting to read but shows dedication and that the candidate is interested in their subject.

The candidate has written a good introduction to this topic, they clearly state what they plan to discuss and have included a brief explanation of their chosen topic. In addition to this the candidate shows good scientific understanding throughout the essay. However I feel that they could have improved their work by linking together other related topics such as the uses of CFC’s and how these effect the atmosphere. This would show a breadth of knowledge and can make the essay more interesting to read. That said, the candidate has unfortunately not written a conclusion. It is essential that you conclude your work, as it allows you to draw the your essay to a close. A good conclusion summarises key points from your essay and includes a personal reaction to the topic.

There some spelling and punctuation errors throughout this essay. These can usually be avoided if you take the time to throughly proof read your work. However the candidate does uses scientific terms accurately which demonstrates a good understanding of the topic.