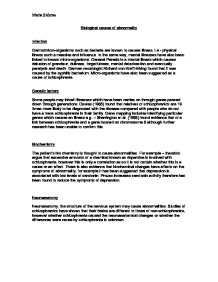 Biological causes of abnormality Infection Germs/micro-organisms such as bacteria are known to causes illness, i.e.- physical illness such a measles and influenza. In the same way, mental illnesses have also been linked to known micro-organisms. General Paresis is a mental illness which causes delusion of grandeur, dullness, forgetfulness, mental deterioration and eventually paralysis and death. ...read more.

Davies (1985) found that relatives of schizophrenics are 19 times more likely to be diagnosed with the disease compared with people who do not have a trace schizophrenia in their family. Gene mapping includes identifying particular genes which causes an illness e.g. - Sherrington et al (1988) found evidence that of a link between schizophrenia and a gene located on chromosome 5 although further research has been unable to confirm this. ...read more.

There is also evidence that biochemical changes have affects on the symptoms of abnormality, for example it has been suggested that depression is associated with low levels of serotonin. Prozac increases serotonin activity therefore has been found to reduce the symptoms of depression. Neuroanatomy Neuroanatomy, the structure of the nervous system may cause abnormalities. Studies of schizophrenics have shown that their brains are different to those of non-schizophrenics, however whether schizophrenia caused the neuroanatomical changes or whether the differences were cause by schizophrenia is unknown. Maria Sideras ...read more.