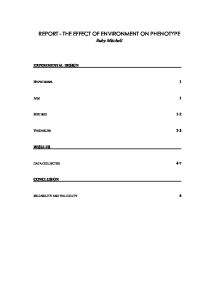 REPORT - THE EFFECT OF ENVIRONMENT ON PHENOTYPE Ruby Mitchell EXPERIMENTAL DESIGN HYPOTHESIS 1 AIM 1 METHOD 1-2 VARIABLES 2-3 RESULTS DATA COLLECTED 4-7 CONCLUSION RELIABILITY AND VALIDILITY 8 INTRODUCTION: The phenotypes of many flowering plants that share a common genotype, are often affected by their environment. Phenotypes result from the expression of an organism's genes as well as the influence of environmental factors. By altering a particular feature of the environment in a controlled situation it is possible to demonstrate this concept. I have chosen to observe the effect of the alteration of a pH on a plants phenotype. A perennial geranium plant was used for this investigation, as it is fast growing, and ideal for cuttings. The pH was altered between cuttings of the same genotype, and a change in phenotype was measured according to root growth. AIM: To demonstrate how the alteration of a plants pH, or environment, will cause changes in the phenotype of that organism. HYPOTHESIS: The alteration of pH in the plant's environment will result in the variation of root growth. PH affects plant growth because it affects the availability of nutrients to the plants. Plants can be affected greatly by the water or substance being used to water it, affecting the way the plant grows and therefore its phenotype. ...read more.

- Light Availability: All specimens were located together in a partial shade area, receiving sunlight in the mornings. Further objects that could have blocked light to any individual plant were removed, to prevent variation in levels of photosynthesis, that would in turn impact on root growth. - Air Temperature: Temperature between the individual plants was not varied as they were all located in the same place and had equivalent water availability and light exposure. - Independent Variable: The effect of four different pH solutions was tested on 16 plants, and 4 were used for a control (water of a neutral pH). The levels of pH that were tested include, >7.6, 7.4, Neutral, 6.6 and <6.4. There were therefore 4 specimens being tested for each pH level. To ensure the validity of the investigation it was necessary to ensure that all 4 specimens for each group obtained their assigned pH levels. Five containers of water were used to disperse pH-altered water into each of the cups, in order to prevent variation of pH within the five different groups of plants. This eliminated error that may have occurred in attempting to individually alter the pH of the water that accommodated each plant. ...read more.

When compared to the root growth of the groups with altered pH levels and the same genotype, it is evident that this change in the plants environment causes an alteration in phenotype. However, there was one problem encountered when assessing the root growth of the group of plants with a high alkaline level (pH >7.6). A black fungi grew on all the stems of the cuttings, during the 3rd week of investigation. This was most likely caused by the high alkaline levels in the water. It appeared as if the fungi impeded root growth on this group of plants as only two cuttings showed signs of root growth. The two plants only sprouted one root both of 0.5mm in length. This became an uncontrollable variable, as it was impossible to conclude whether or not it was the alkalinity that was a direct cause of the little root growth. If the experiment was repeated, I would further the investigation by researching the exact cause of the fungal growth and possibly reduce the pH level to gain results that would not be effected by the growth. Regardless of this fault in the experiment there were still enough pH groups to compare to the control in order to make a valid conclusion. The other three pH groups (6.4, 6.6 and 7.4) all supported the hypothesis by demonstrating a change in phenotype in comparison to the control. ...read more.