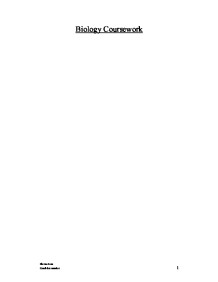 Finding out the affect of different concentrations of sucrose solution on the mass of potato chips.

* Forceps * Paper towel Method Using a cork borer I will cut out 5 potato cylinders. To make sure they are of the same length and diameter I will line them up and use a scalpel to cut the ends so they are of 4.5 mm in length. I then have to blot them dry with a paper towel to remove surface water. I will then weigh each one on the top pan balance and record the mass (grams to 2.d.p.) in a table below. I will fill each specimen tube with one of the different concentrations of sucrose solution so that one specimen tube has 25cm3 of distilled water and another has 25cm3 of 5% sucrose solution etc. I will put one potato cylinder in each of the filled specimen tubes and put the bung on. I will leave the potato cylinders in the specimen tubes for 21 hours. After the potato cylinders have been left in the solutions for 21 hours, I will take the potato cylinders out of the specimen tubes with forceps. I will put the wet potato cylinder on a paper towel and blot them dry. I will put them on the top pan balance and record the mass in the table shown below. % concentration of sucrose solution Start mass (g) Mass after 21 hours (g) Change in mass. Percentage change in mass Turgid/flaccid Distilled water 0% 5% 10% 15% 20% 25% I will then calculate the mass change and the percentage change. Also note down the state the potato cylinder is in-is it flaccid or turgid. (changes in mass have to be recorded to 2.d.p) Use these calculations for the changes in mass: The change mass=mass after 21 hours - start mass Percentage change in mass=change in mass/start mass x 100. (Note that the signs before the values are to show whether they have lost mass (-) ...read more.

To this in a future experiment that requires a weigh, I could use one that will give more accurate masses e.g. gives masses to the nearest 0.0001g instead of the normal 0.01g. Even though the results were fairly close to 'line of best fit' on my graph, there was one that was not as close to the line of best fit than the others. I think this result is a slight anomalous result as the mass is slightly lower than of the expected mass shown by the line of best fit. I think this was probably caused when I blotted excess water off with a paper towel, I took off too much water and therefore took off some of the mass too but the result still supported my conclusion as it followed the overall trend of the data. In order to make sure this does not happen again, I need to have a system or way of taking the same amount excess water off all the potato chips. Maybe next time I could roll each potato chip down the paper towel once and blot the ends of them two times on the paper towel. To prove that my prediction is correct in any osmosis experiment, I could do another experiment, which shows osmosis happening and why it happens-different concentrations between a selectively permeable membrane. The experiment is shown below: Apparatus * 20cm in length visking tubing. * 20cm3 water * 10cm3 plastic syringe * testing tube Method Tie a knot at the end of 20cm length visking tube that has been soaked in water. Put 3cm3 of strong sugar solution in the plastic syringe and use that to partly fill the visking tube-it should be floppy. Place the visking tubing into a test tube containing water 20cm3 . Leave the visking tubing in the test tube for about 30-45 minutes. You should record your observations of the visking tubing before it was put into the test tube of water and after it had been left in the water. Look for any changes in how it looks and feels. ...read more.