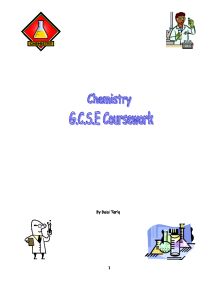 Calcium carbonate reacts with strong acids such as Hydrochloric acid to give off carbon dioxide and water.

The preliminary showed that the experiment worked. The timeframe is not too long or short and it can be easily measured. The range is okay, but I must be careful to not go over 60�C as I spotted some hydrochloric acid vapours, anything over 60�C would be dangerous. Experiment method 1. Set up the apparatus as shown in figure two. 2. Put 25cm� of hydrochloric acid (two molar) into a 100cm� graduated cylinder. 3. After doing this pour the hydrochloric acid into the Buchner flask and take the temperature using the thermometer, the temperature should be approximately under room temp of 20�C for your first result. 4. Weigh two grams of calcium carbonate chips on the 0.1 weighing scale. Use a watch glass so it easier to put the chips into the Buchner flask afterwards and when weighing place the watch glass on the scale and then reset the scale so that the weight of the watch glass isn't taken. 5. Start to add the calcium carbonate chips into the Buchner flask and at the same time start the stop clock and put the bung into the Buchner flask to prevent carbon dioxide escaping. 6. Stop the clock when you have collected 100cm� of carbon dioxide gas in the syringe. 7. Record your results in a suitable. 8. Repeat steps one to seven for 30�C, 40�C, 50�C and 60�C of hydrochloric acid but this time use a Bunsen burner to heat up the acid. ...read more.

However the 60�C time of 23.38 seconds was a slight anomalous result perhaps due to the acid temperature not being accurate enough because the acid was heated by the Bunsen burner meaning that the temperatures were not constant and you can observe this on the average results graph. The one over time graph (figure four) shows the rate of the reaction between the calcium carbonate chips and the hydrochloric acid and if you observe the graph you can see that the 60�C time again is an anomalous result. Therefore my conclusion is that the white cliffs on the Antrim coastline are eroded less in the winter due to the acids being low in temperature in the rain even though there is more rain, whereas in the summer the acids in the rain are warmer causing the white cliffs to erode at a faster rate than in winter. Evaluation The experiment worked well even though I had one anomalous result. To improve the experiment and to obtain better results, the surface area of the marble chips could be decreased and instead of using small calcium carbonate chips, powdered calcium carbonate chips could be used to make the surface area even more accurate. Therefore the hydrochloric acid that would be used with the powdered calcium carbonate chips would have to be weaker because the reaction would occur too fast. Also instead of using a Bunsen burner, a water bath could be used instead to keep the temperature constant and to obtain more accurate results. 1 ...read more.