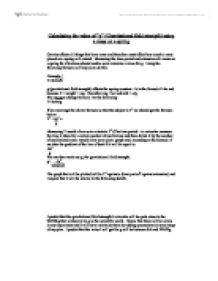 Calculating the value of &quot;g&quot; (Gravitational field strength) using a mass on a spring

Gravity affects all things that have mass and therefore must affect how much a mass placed on a spring will extend.  Measuring the time period and extension of a mass on a spring for vibrations should enable us to calculate a value for g.  Using the following formula will help us to do this:

We can now change formula 1 to the following:

If we rearrange the above formula so that the subject is T2 we should get the formula below:

We can then work out g, the gravitational field strength.

Spring – There were two types of spring that I could choose from – a long thin spring (average 5mm diameter, 100mm length) or a short, wide spring (average 11mm diameter, 21mm length).  I chose the short, wide spring because when the masses were placed on the longer spring they were more prone to falling off and this may have been a safety hazard.

Range of masses – I tested the highest and lowest masses to reach a conclusion about the range of masses that I was going to use.  I tested to see whether the masses made the spring reach its elastic limit at the highest mass and whether the mass fell off the hook at the lowest mass.  I decided that the range of masses from 50g to 450g would give me enough results to plot an accurate graph with and 450g did not cause the spring to reach its elastic limit.

Safety glasses must be worn as a precaution, in case the weight hook, along with the weights falls off in the middle of a cycle.

There may have been experimental errors in the measurement of the length of the extension:

This value is some way off my original, predicted value but this may have been because I didn’t think that my sources of error would be so significant.  The total error calculated above may not be the real total error, as I haven’t taken into account reaction times or other systematic errors.

The value that I got for g may not have been accurate because of the % errors and reaction times and so may not be a very reliable result.

To help minimise errors, an electronic recording method to record the results would have increased the accuracy, because of the lack of reaction time.  A stopwatch with increased accuracy may have also helped.