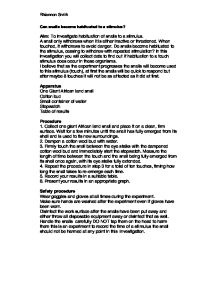 Can snails become habituated to a stimulus

Can snails become habituated to a stimulus? Aim: To investigate habituation of snails to a stimulus. A snail only withdraws when it is either inactive or threatened. When touched, it withdraws to avoid danger. Do snails become habituated to the stimulus, ceasing to withdraw with repeated stimulation? In this investigation you will collect data to find out if habituation to a touch stimulus does occur in these organisms. I believe that as the experiment progresses the snails will become used to this stimulus (touch), at first the snails will be quick to respond but after maybe 8 touches it will not be as affected as it did at first. Apparatus One Giant African land snail Cotton bud Small container of water Stopwatch Table of results Procedure 1. Collect one giant African land snail and place it on a clean, firm surface. Wait for a few minutes until the snail has fully emerged from its shell and is used to its new surroundings. 2. Dampen a cotton wool bud with water. 3. Firmly touch the snail between the eye stalks with the dampened cotton wool bud and immediately start the stopwatch. ...read more.

We controlled the pressure exerted upon the snail when touching it; also we kept the area where we touched the snail the same. Results touch Time taken for re-emergence (seconds) 1 15.95 2 14.88 3 13.69 4 9.16 5 7.00 6 3.97 7 5.13 8 1.97 9 No response to stimulus 10 No response to stimulus Data Analysis As the results show the snail became used to the stimulus as it took them less time to re-emerges after each time. As shown from the table and graph at first the snail took a while to re-emerge from being taped on the head but as the experiment continued the snail "adapted" and re-emerged quicker on the whole. The last two tests on the snail failed to produce any response, as it had become accustom to the touch on the head and did not feel it was a threat any longer. The was an anomaly on test 7 where the time went from 3.97 seconds to 5.13 seconds and then continued to decrease. ...read more.

It allows us to adapt to the familiar in order to preserve our ability to react rapidly and appropriately to new or dangerous surroundings. Habituation can be very important to an animal in its natural surroundings. In the process of this investigation we have had to be careful about the ethics and whether this experiment had a viable reasoning to use the snails in this way. I believe that there were no ethical problems the snails were well treated and not in any danger nor did they have any threat towards them. If I was to repeat this investigation I would gather more results to make my overall investigation more reliable also by doing this I would be able to pinpoint the outliers and eliminate them so my results would be more reliable. To make my results more accurate I could use a better timer where I would know that there would be no systematic error. To further develop my investigation I could use other animals to see if habituation is the same with all or if the time taken is different, although we would have to look at the ethical issues we would be faced with if we were to develop our investigation. ?? ?? ?? ?? Rhiannon Smith ...read more.