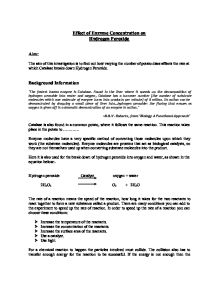 Effect of Enzyme Concentration on Hydrogen Peroxide Aim: The aim of this investigation is to find out how varying the number of potato discs affects the rate at which Catalase breaks down Hydrogen Peroxide. Background Information "The fastest known enzyme is Catalase. Found in the liver where it speeds up the decomposition of hydrogen peroxide into water and oxygen, Catalase has a turnover number [the number of substrate molecules which one molecule of enzyme turns into products per minute] of 6 million. Its action can be demonstrated by dropping a small piece of liver into...hydrogen peroxide: the fizzing that ensues as oxygen is given off is a dramatic demonstration of an enzyme in action." -M.B.V. Roberts, from "Biology A Functional Approach" Catalase is also found in a common potato, where it follows the same reaction. This reaction takes place in the potato to ............ Enzyme molecules have a very specific method of converting those molecules upon which they work (the substrate molecules). Enzyme molecules are proteins that act as biological catalysts, so they are not themselves used up when converting substrate molecules into the product. Here it is also used for the break down of hydrogen peroxide into oxygen and water, as shown in the equation below:- Hydrogen peroxide Catalyst oxygen + water 2H2O2 O2 + 2H2O The rate of a reaction means the speed of the reaction, how long it takes for the two reactants to react together to form a new substance called a product. There are many conditions you can add to the experiment to speed up the rate of reaction. In order to speed up the rate of a reaction you can choose these conditions: > Increase the temperature of the reactants. > Increase the concentration of the reactants. > Increase the surface area of the reactants. > Use a catalyst. > Use light. For a chemical reaction to happen the particles involved must collide. The collision also has to transfer enough energy for the reaction to be successful. ...read more.

* 15 boiling tubes * Distilled water in order to make dilutions * 3 delivery tubes attached to bungs which fit delivery tubes and the gas syringes * Boiling tube racks to place the boiling tubes into * 3 clamp stands to hold the boiling tubes upright * 10 pipettes or 2 measuring cylinders to add the hydrogen peroxide into the boiling tubes * Safety goggles to avoid eyes coming into contact with hazardous chemicals * Rubber gloves to prevent skin from coming into contact with hazardous chemicals * Forceps (tweezers) to place and remove the potato discs from the boiling tubes Method: 1. Collect the apparatus listed and set up the experiment as shown. 2. Using a potato borer with a diameter of 1cm bore the potato on a white tile. Making sure fingers are kept clear of the borer end, so you don't hurt yourself. 3. Using forceps (tweezers), remove the tube of potato from the borer. Forceps should be used to allow minimal exposure of the potato discs to the surrounding environment. 4. Using a knife, cut the tube of potato into equal sized discs with a diameter of 2mm. Make certain that you are careful when cutting the potato and keep your fingers clear of the blade. 5. There are 30 discs need as the first experiment is carried out3 times using 10 discs each time. 6. Into a boiling tube, collect 10cm� of hydrogen peroxide (diluted to 20%vol.) using a pipette or measuring cylinder. 7. Next, collect the rubber bung with delivery tube attached to it. Make sure that the two are well connected to prevent any loss of the oxygen gas that will be produced. 8. The other end of the delivery tube should be attached to the gas syringe. 9. Then add 10 potato discs to a boiling tube containing hydrogen peroxide and close the bung straight away. ...read more.

This prevented oxygen gas being collected in the syringe. This could be overcome by using a conical flask. Conical flask will give a bigger volume to react in would allow maximum oxygen gas to be collected. A good point is that the syringe was held on the clamp stand. There was no contact with it. This would prevent body heat being transferred to the syringe. Having held the syringe at 180 degrees, meant that it was easy to see how much gas had been collected. It made reading of the meniscus straightforward. However there could have been a possibility that I mis-read the meniscus reading. This could have also been true when measuring the hydrogen peroxide. Another positive element was that no kinetic energy was applied to the boiling tube. As you can see that there are many criticism of my method. Overall the method was reliable but may be the way things were used may have lead to inaccuracies. And of course there was human error too. If I was to do this experiment again then I would make sure that all apparatus was cleaned with a disinfectant. This time I would utilise a conical flask rather than a boiling tube. An additional thing I could do is that I can control some of the variable affecting the enzyme activity. For example temperature can be kept constant by carrying out the experiment in a water bath. pH can be controlled by adding an equivalent amount of buffer solution each time. Investigations on enzymes are a very wild field. If I was to make further investigations, I would investigate how the activity of enzyme differs across different potatoes. So I could try a range of potatoes such as canned, frozen dried. I can see hoe the activity of the catalase differs across different potatoes. Also since the aim of my experiment was to research on the concentration of enzymes, I will conduct the further experiment with a much higher range of potato discs, to see the affect of the rate of reaction. ?? ?? ?? ?? ...read more.