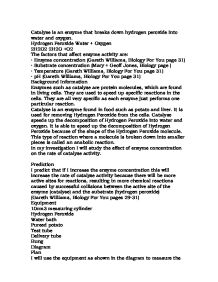 Catalyse is an enzyme that breaks down hydrogen peroxide into water and oxygen. Hydrogen Peroxide Water + Oxygen 2H2O2 2H2O +O2 The factors that affect enzyme activity are: � Enzyme concentration (Gareth Williams, Biology For You page 31) � Substrate concentration (Mary + Geoff Jones, Biology page ) � Temperature (Gareth Williams, Biology For You page 31) � pH (Gareth Williams, Biology For You page 31) Background Information Enzymes such as catalyse are protein molecules, which are found in living cells. They are used to speed up specific reactions in the cells. They are all very specific as each enzyme just performs one particular reaction. Catalyse is an enzyme found in food such as potato and liver. It is used for removing Hydrogen Peroxide from the cells. Catalyse speeds up the decomposition of Hydrogen Peroxide into water and oxygen. It is able to speed up the decomposition of Hydrogen Peroxide because of the shape of the Hydrogen Peroxide molecule. This type of reaction where a molecule is broken down into smaller pieces is called an anabolic reaction. In my investigation I will study the effect of enzyme concentration on the rate of catalyse activity. Prediction I predict that if I increase the enzyme concentration this will increase the rate of catalyse activity because there will be more active sites for reactions, resulting in more chemical reactions caused by successful collisions between the active site of the enzyme (catalyse) and the substrate (hydrogen peroxide) (Gareth Williams, Biology For You pages 29-31) Equipment 10cm3 measuring cylinder Hydrogen Peroxide Water bath Pureed potato Test tube Delivery tube Bung Diagram Plan I will use the equipment as shown in the diagram to measure the amount of oxygen that gathers into the measuring cylinder. The amount of oxygen is directly related to the rate of catalyse activity. The more oxygen, the more catalyse activity and the less oxygen, the less catalyse activity. ...read more.

At current I do not have enough reliable evidence to draw any conclusions more specific than the rate of reaction is proportional to the temperature until 55OC is reached and after this point the temperature is inversely proportional to the rate of reaction. Note: "Optimum operating temperature/pH" means this is the temperature/pH where the enzyme (amylase) operates the fastest.Evaluating Evidence I believe that the experiment was successful but some of the results were unexpected/unreliable. The time taken for the amylase to digest the starch at 40 OC was far too fast (see Graph 1) it should have been between 4 and 4.5 minutes. All the other results seemed to fit into the trend on the graphs. I believe that the experiment was designed well but there were a few problems. The optimum temperature for the amylase was too high. I believe that all the results were skewed because the enzyme was not given enough time at each particular temperature to be fully affected before it was added to the starch. Because of time restraints they were only left in the water bath for 10 minutes before starting the experiment. However, they should have been left in the water bath for about 30 minutes so that the amylase had been completely affected by the temperature before the experiment was started. I decided to conduct the experiment at 10 OC intervals instead of 5 OC because there was not enough time. When the results were collected I plotted them on a rough graph to find the optimum temperature and then conduct the experiment at this temperature to ensure it was the optimum temperature. I also conducted all three experiments for each condition at the same time to save time. Additional work, which could be carried out, is to repeat the experiment using, a wider range of temperatures and pH levels, a range of different starch solution concentrations or using different enzymes such as protease with a protein. ...read more.