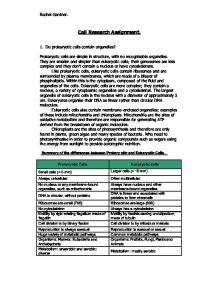 Examples of prokaryotic cells are: * Bacillus Bacteria * E. coli Bacteria * Salmonella Bacteria Examples of Eukaryotic cells are: * Red blood cells * Centric Diatom * Golden Colonia Alga Eukaryotic cell: Prokaryotic cell: (www.biologymad.com) 2. What is endosymbiosis and how does it explain the existence of mitochondria and chloroplasts? An endosymbiont is any organism that lives within the body or cells of another organism, i.e. forming an endosymbiosis. Examples are nitrogen-fixing bacteria (called rhizobia) which live in root nodules on legume roots, single-celled algae inside reef-building corals, and bacterial endosymbionts that provide essential nutrients to about 10%-15% of insects. Endosymbiosis is the process by which prokaryotes gave rise to the first eukaryotic cells. Chloroplasts in plants and mitochondria in other eukaryotes are thought to have evolved through a form of endosymbiosis. One theory is that the mitochondria evolved from small hetrotrophic prokaryotes that were engulfed by a larger eukaryotic cell. ...read more.

The extensions of the cell that form during this movement are called pseudopodia, false feet. The cell membrane of the white cell completely surrounds a bacterium, enclosing it in a self contained vesicle called a phagosome. This vesicle is inside the white cell but the bacterium is a prisoner, surrounded by an internal cell wall to keep it away from the cell's cytoplasm. An organelle called lysosome is involved in the breakdown of the cellular components, which then fuses with the phagosome. The contents are degraded and either released intracellulary to undergo further processing or extracellulary via exocytosis. Phagocytic cells are either one-celled organisms or one of the body cells, such as a white blood cell. Bacteria, dead tissue cells and dust particles are all examples of particles that may be phagocytosed. Example, a white blood cells are cells of the immune system defending the body against both infectious disease and foreign materials. They engulf potentially harmful or foreign objects in the blood therefore protecting the body from attack. A diagram of the process of phagocytosis is shown below. (http://uk.images.search.yahoo.com/images/view?Fscienceroll.com%2F2007%2F04&size=93.9kB&name=phagocytosis. ...read more.