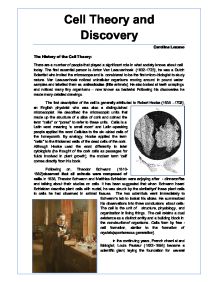 Cell Theory and Discovery. The first description of the cell is generally attributed to Robert Hooke (16351702)

The History of the Cell Theory: There are a number of people that played a significant role in what society knows about cell today. The first essential person is Anton Van Leeuvenhoek (1632-1723), he was a Dutch Scientist who invited the microscope and is considered to be the first micro-biologist to study nature. Van Leeuvenhoek noticed unicellular organisms moving around in pound water samples and labelled them as animalcules (little animals). He also looked at teeth scrapings and noticed many tiny organisms - now known as bacteria! Following his discoveries he made many detailed drawings. The first description of the cell is generally attributed to Robert Hooke (1635-1702), an English physicist who was also a distinguished microscopist. He described the microscopic units that made up the structure of a slice of cork and coined the term ''cells'' or ''pores'' to refer to these units. ...read more.

The two scientists went immediately to Schwann's lab to lookat his slides. He summarized his observations into three conclusions about cells: The cell is the unit of structure, physiology, and organization in living things. The cell retains a dual existence as a distinct entity and a building block in the constructionof organisms. Cells form by free - cell formation, similar to the formation of crystals(spontaneous generation). In the continuing years, French chemist and Biologist, Louis Pasteur (1822-1895) became a scientific giant, laying the foundation for several branches of science. During Pasteur's time, there was great controversy over the theory of "spontaneous generation" - which believed that things such as beetles, eels, maggots and microbes arise spontaneously from decomposing matter. ...read more.

In 1932 he built the first crude prototype alongside Max Knoll (under whom Ruska obtained his doctorate). Despite the fact that it was primitive and not fit for practical use, the instrument was still capable of magnifying object 400 times, producing images in far greater detail than optical microscopes. The Cell Theory: The Cell Theory is composed of 5 Main Ideas. 1. All living things are composed of one of more cells 2. The cell is the basic unit of organisation of organisms 3. All cells come from pre-existing cells 4. Cells contain hereditary information which is passed from one cell to another through division 5. Energy flow occurs within cells The big exceptions to cell theory are viruses. These do contain cells however they are not alive because they are not able to grow or reproduce outside of a host cell. ?? ?? ?? ?? Cell Theory and Discovery Carolina Lozano ...read more.